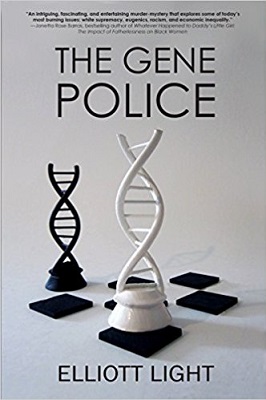 The Gene Police is a work of fiction that wraps a murder mystery in elements of the eugenics movement. To be clear, it is not a treatise on the subject but should enlighten readers about this little known pseudo science and hopefully inspire some of them to delve deeper into its history, its proponents, and its impact on American life.

The author puts it this way: “My interest in race issues can be traced to growing up in the segregated suburbs of Washington, D.C. My mother’s relatives were slave owners. My great great uncle was a famous eugenicist who was instrumental in the passage of the miscegenation and sterilization laws in Virginia. I’m convinced that if we as society are to rid ourselves of the curse of racism and white supremacy, we need to continue to keep the issue in the public conversation. My hope is that The Gene Police will add to the dialogue about racial issues by teaching readers about America’s fascination with eugenics while simultaneously entertaining them.”

I am a retired patent attorney living in Florida with my wife, Sonya, and our feline, Tsuki. I spent most of my life in the Washington, D.C. area. I grew up in McLean, Virginia before the beltway was constructed. Some of my classmates in grade school lived on nearby farms. ​McLean had a small town feel to it. Gossip spread without the Internet. Party lines were common. Secrets were hard to keep.

When I was in my early thirties, my life pivoted when I was accused of a crime I didn’t commit. My defense counsel and I discussed plans for my likely indictment and possible imprisonment. I could expect to be handcuffed and paraded in front of the media. This experience with the so-called justice system ended after a two year ordeal without an indictment and without going to trial. Even so, it could have ended differently.

Sadly, I will never fully believe that prosecutors, investigators, or the government are as interested in the truth as they are in getting a conviction, an attitude that I share with the semi-fictional Shep Harrington.