Girl Out Of Water by Nat Luurtsema – Book Review

Girl Out Of Water by Nat Luurtsema – Book Review 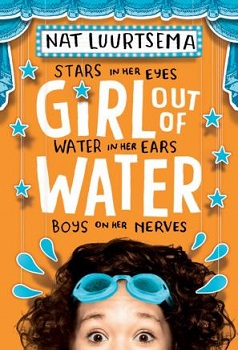 Lou Brown’s life is going down the pan. Best friend Hannah sailed through the Olympic time trials and is off to her fancy-pants new swim training school, while Lou’s own failure to qualify leaves her without a hobby – or a friend. As Lou tries to navigate her post-swim world, a chance encounter with three boys with stars in their eyes takes her life in a surprising new direction.

One that leads to a crazy world of underwater somersaults, talent show auditions, bitchy girls and one great big load of awkward boy chat.

Lou Brown has only one goal in life, to become an Olympic swimmer, along with her one and only friend, Hannah who is a swimmer too.

But when Lou fails to make it in the heats to get into the prestigious high-performance training camp, and Hannah does, she is left with no swimming lessons, no best friend to hand around with, and no purpose to her life.

Things get doubly hard for her at school without Hannah, as Lou is classed as a social outcast, and no-one wants to sit with her, let alone talk to her. So why is it that three of the cool boys are trying to get her attention, and what on earth are they trying to do in the swimming pool?

Girl out of Water is a hilarious account of one young girl’s life. Lou is extremely funny and witty and had me crying with laughter, at and with her, throughout the book.

Her life is completely bizarre, from an older sister who pretends that she doesn’t even know her, to a divorced mum and dad that live together, whilst her mum goes on dates with other men, and her out of work dad goes out everyday in his suit, pretending to go to job interviews. Plus there is also her friend Hannah, who seems to be losing the plot whilst she is away at camp, making for a daring rescue mission.

The cool boys, Gabriel, Roman and Pete, want to win the Britain’s Hidden Talent contest, and they want to do it with a sort of synchronised swimming, underwater dancing show. They have already failed one audition and now they need Lou to teach them everything she knows and to train them up, so that they can win. The boys are complete individuals, personality-wise, yet they are all just as wacky as Lou. Over time you start to notice a friendship occurring between the outcast and the cool kids.

The plot had me hooked right from the opening chapter and I read the book in two sittings, on a return train journey. I had many strange looks at times as I actually did laugh out loud on the train in front of lots of strangers – oops!

If you are looking for a book that will give you a happiness-boost and lighten your mood, then this is the one. Whether you are 8 or 80, you will love this book.

She has just finished directing WYRDOES, a comedy feminist ‘Macbeth’, with backing from Film London, Film4 and the British Arts Council. It will be a part of the Shakespeare Lives worldwide tour, which will play to an audience of 500 million.

Nat’s latest book is a Young Adult novel – GIRL OUT OF WATER. It was simultaneously published as GOLDFISH in USA.