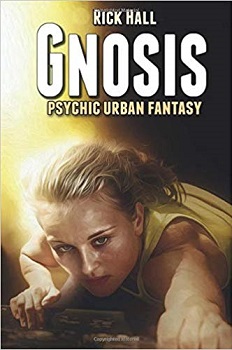 When a series of crushing headaches lands Sam in the hospital, she wakes to an imaginary voice in her head: Alexander, an adorable ten-year-old who claims to be a telepath. The doctors think Sam’s brain was damaged after a stroke, but they’re wrong. Alexander isn’t imaginary. He’s a sentient virus, and the government knows about him. After all, they created him.

Teenager Samantha Black is a parkour enthusiast something that has come in handy since her police officer dad was murdered and no-one seems to be looking into his death.

She has been tracking one of her father’s partner’s squad cars, listening in to conversations to find out if any new information about her father’s murder has come to light, however, she has to stay at close range to the car to listen in.

The police though are after her and one mistake costs her freedom. Once at the police station someone claiming to be from the homeland security removes her from the station claiming that she is needed in witness protection due to a terrorist threat.

Once there Sam is held up in a room with a security officer who is supposed to be looking out for her. Sam begins suffering from headaches and is soon in the hospital with a suspected virus – Trella Gondii. When she wakes up after two days in the hospital she seems to have a young boy called Alexander living inside her head, although he can move to inside other people’s brains and read their minds.

With the help of Alexander and some mystery ‘ghost’ who contacts her via her mobile, Sam manages to give ‘homeland security’ the slip and sets out to find out what is really happening to her and who really killed her father too.

The above is just a small snippet of what Gnosis is about as there is so much happening. The book was really enjoyable and I eagerly turned each page looking forward to continuing the story.

I love little Alexander, for a virus, he was such a cutie and he certainly behaved like a child, sulking if he was told off or getting giddy. He also wasn’t up on the ways of the world just yet.

Sam was also a wonderful character. I enjoyed her skills and her determination to discover the truth about her father’s murder, not believing the hype that he was a dirty cop.

I absolutely enjoyed the book, however, I’m wondering how many of the YA audience will pick the book up. My main concern is the size of the book, It’s a big book, both in pages and height (not so bad if you are reading on a Kindle). I believe with some tweaking (removing a few sections that didn’t add anything to the story) this book could be amazing and be the book that YA readers are craving.

It is fast-paced, action-filled, and has a great cast of characters and was pure enjoyment the whole way through.

RICK HAS FOLLOWED a strange path in life. Graduating from Penn State in 1986 with a degree in electrical engineering, he spent a few years working for the US Navy in Virginia, repairing F-14’s and A6’s. After a brief stint designing circuit boards in Pittsburgh, he made a left turn and became a video game developer. For the next fifteen years, he was a programmer, a game designer, a producer, and executive management. Working for both Take 2 Interactive Software and for Electronic Arts, his name appears in the credits for titles such as Star Crusader, Ultima Online, and Madden Football.

Somewhere along the way, he took yet another detour with the University of Central Florida, serving as one of the original faculty for their nationally recognized Florida Interactive Entertainment Academy, where he teaches video game development.

He is an avid chess player (having briefly trained with a Grandmaster, against whom he once proudly managed to achieve a draw). He collects history books, boasting over seven hundred volumes in his library at home. He is a process junkie, obsessed with making spreadsheets for EVERYTHING. He has been writing as a hobby for over a decade, with the patient forbearance of his family, who allow him the opportunity to close the office door at home and tinker endlessly.

He lives at home in Florida with his wife Cheryl and daughter Jesse, along with two lovable dogs, a psychotic cat, and a guinea pig named Max.