All Grown Up by Jami Attenberg – Book Review

All Grown Up by Jami Attenberg – Book Review 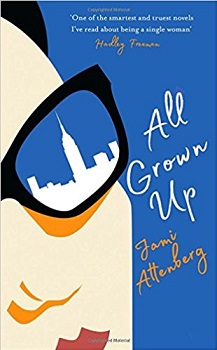 Andrea is a single, childless 39-year-old woman who tries to navigate family, sexuality, friendships and a career she never wanted, but battles with thoughts and desires that few people would want to face up to.

Told in gut-wrenchingly honest language that shimmers with rage and intimacy, All Grown Up poses such questions as:
– What if I don’t want to hold your baby?
– Can I date you without ever hearing about your divorce?
– What can I demand of my mother now that I am an adult?
– Is therapy pointless?
– At what point does drinking a lot become a drinking problem?
– Why does everyone keep asking me why I am not married?

Has anyone ever told you to grow up and act your age? Tell you that it’s about time you got your act together and settled down before it’s too late? What if you weren’t sure whether you wanted to do either, what if you wanted to go against society’s norms and not be a wife and mother, but to stay carefree and single?

Andrea is fast approaching 40, she’s single and child free. She works in advertising, a job she hates, and has her own apartment in New York. Many would look at Andrea and feel envious of her life style. Andrea however, doesn’t really know how she feels. She knows that she is unhappy, but she only wants happiness on her terms. She’s not sure if she is single by choice, or whether she just bores of men easily.

Her life is far from straight forward. By flitting back and forth in time, randomly, starting back in her adolescence years, you get to witness why Andrea has such a complex life, giving you a better understanding of how, and why, she feels and acts the way she does today. You get to meet her less than perfect parents (to be honest no-one is perfect). Her mother a very opinionated woman, an activist who fought for what she felt was right. Her father a drug addict. Not only did her family shape her life, her work colleagues and friends played a part too.

Her best friend Indigo has settled down, gotten married and had a child. Even her brother has gotten his act together, and now he and his wife have a baby daughter. It is this period in Andrea’s life story that I felt an emotional attachment to. Her niece has a terminal illness, as a mother of a child with a life threatening, incurable illness, this touched emotions in me which I buried deep within the last few years.

All Grown Up does contain a lot of humour, but I suppose that would depend on how you define humour. Some may read this book and state that there was no such thing, others may see the humour in all of Andrea’s life. This is what makes this a great book. It’s a bit like Marmite, you are either going to love it, or hate it. It certainly won’t be for everyone.

Quite often it felt like watching a movie. One where the main character tries to explain how they became the person they are today, and justify why they behave the way they do via a series of clips delving deep into their past, just so that we can then empathise with them. Though I don’t feel in this instance that Andrea is looking for empathy, she just wants to be understood, whilst at the same time, trying to understand herself.

The book, even-though only 207 pages, long did take me a while to get through it. I struggled with the way in which the book was written, there was no chronological order to it. Andrea is also not a character that you instantly like, and if I’m honest, I’m not even sure as I closed the book whether I ever did like her.

But there was something about this book that made me want to read it, something holding me to the pages. It wasn’t the characters, though there was a lot that I enjoyed getting to know, nor the plot, it certainly wasn’t original. It was the rawness with which Ms. Attenberg writes. It delves deep into your soul and drags up all kinds of emotions, giving you that need to read, the need to try to understand, and the reality check that sometimes we need to remember that not everyone’s life is easy, and not everyone who seems okay on the outside really is.

This is an impressively, moving novel, one that you won’t forget in a hurry. As I said early, Andrea didn’t want empathy, but maybe we need to give it.

At the therapist’s office, I am hostile, and physically awkward, head hanging low, shoulders slumped, hunched over at the waist in the dark leather chair. I could have sat on the couch, but I would like to resist all temptation to curl into the fetal position and die. And that’s what the couch is saying to me. Sit on me and die.
This is only the fourth time I’ve visited my therapist in the past six months. She has been leaving me voice mail messages, suggesting I set up an appointment. “Why don’t you check in?” she says. Now I’m here and I can’t look her in the eye. Isn’t it enough that I’m in your office? is what I want to say to her. Don’t I get points for making it in the first place? And now you want me to perform, too?
I’ll admit that each time I’ve seen her I’ve spilled my guts and felt cleansed. Then I become convinced I never need to see her again. Soon enough my well fills and she seems to know just as it’s reached its brim, and that’s when she phones me. I don’t pick up, ever. I let her talk into the air. Let her stew. I don’t know why I’m mad at her. She’s just doing her job. But shouldn’t I feel better by now? It’s been seven years.
She asks me how I’ve been. Job, adequate; brother, terrible; I feel closer to my mother lately, and that’s been nice, but the whole family is devastated about my brother’s sick baby. We talk about my love life. She always tries to figure out what I want from a man, from a relationship. She asks me point-blank: “What do you want? Until you know what you want you’re not going to find it.” She’s giving me tough love. I think: You don’t know anything about tough, lady. Then I tell myself: You don’t know anything about love.
I don’t answer her directly. Instead I go through all the men in my life for her. There is a man I knew years ago, an artist, struggling, whimsical, pleasant, broke. I do not take him seriously as a potential love interest, but sometimes we meet for drinks. There is a former neighbor I text with and sometimes he comes over and we drink wine on my roof. He won’t date me because I’m white and he’s black and he refuses to date white girls but I think maybe we’re dating anyway. There is a newly single man, a divorced dad ten blocks away. I met him at a barbecue and we’ve had sex a few times, and he pounds into me like he’s going for a gold medal in fucking. Whenever I leave him I am shaken, offkilter, yet I always return when he calls.
“If you add them all up they equal a boyfriend,” I say.
“No, they don’t,” she says. “Half a boyfriend, then,” I say. She says nothing. There is a notebook on her lap. She writes nothing in it. Finally I start to cry. “I don’t understand why you won’t just leave me alone,” I say. I wish I were on that couch, I think. That couch looks great.

Jami Attenberg has written about sex, technology, design, books, television, and urban life for The New York Times Magazine, The Wall Street Journal, The Guardian, Lenny Letter and others. In April 2017, HMH Books will release her novel All Grown Up. It will also be published in the UK, Italy, Holland, Poland, France and Germany.

She is originally from the Chicago area, but happily divide her time between New Orleans, LA and Brooklyn, NY. 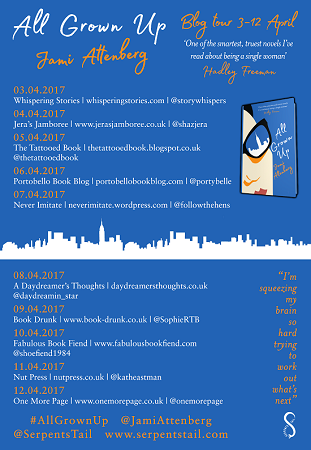