A Ghost’s Life for Me by Nick R B Tingley

Nick R B Tingley lives in Kent, England, where the first of his Detective Sergeant Evelyn Giles novels is set.

When he isn’t writing, Nick likes to spend his days playing rugby or going out for long walks along the River Eden, where his first Giles novel is set.

The Bluebell Informant is my first novel – only it isn’t.

It’s not even the first book I wrote about Detective Sergeant Evelyn Giles – but it is the first published book in the series.

The Bluebell Informant isn’t even my first novel.

And yet, if you visit my author page on Amazon or elsewhere, with the exception of a small book of poetry that I wrote two and half years ago, the only novel you will find there is ‘The Bluebell Informant’.

But it is not my first published novel.

In fact, it may surprise you to learn that I have ten novels out on general sale – plus a collection of smaller, novelette type stories. And yet, if you were to pick up any of those novels, I would be willing to bet a small fortune that you won’t find my name mentioned anywhere in them – certainly not on the title page.

It’s not that I use a pseudonym – although at one stage I was very tempted to do so.

It is because I am a ghost…

It’s a great conversation starter, but one that I’ve found is very difficult to follow up on. Ghost writers, by their very nature, are rather secretive about the books they’ve had a hand in writing. Before you ever start writing, you usually have to sign several non-disclosure agreements that prevent you from ever uttering the names of authors you’ve ghosted for, which can become a bit of a pain when the immediate reaction of anyone you tell is to ask the question:

‘Interesting, anyone I know?’

It takes a huge amount of self-control not to blurt out a name.

But after the initial disappointment that invariably occurs when the person you’re talking to realises they aren’t going to get any juicy gossip about which writer doesn’t in fact write their own work, the next question is invariably quite difficult to answer:

‘Why do you write other people’s work?’ they ask. ‘Isn’t it disheartening when other people get praise for work you’ve done?’

Oddly enough, a few years ago, I would’ve asked the same question.

As an author who wanted to create work in my own right – with my name plastered across the front cover – I couldn’t think of anything worse than pouring my skills into a piece of work only to never get any credit for it. I used to have nightmares where I was sat watching as someone was able to quite their day-job off the back of my work whilst I was left scrimping for cash with occasional under-the-radar short stories.

Despite this, I did become a ghost writer. And I can tell you now, nothing is further from the truth.

Being a ghost writer has been one of the most exciting experiences of my life. You get to work with some genuinely interesting people and work on stories that, once you have finished, you get to walk away from – you don’t have to think about marketing it, or scraping some reviews together, or writing hundreds of guest posts to make people aware that your work is out there.

You just write the story, submit it to the client and walk away. It’s what most writers dream of – the only downside being that you can’t ever take credit for it when it becomes a success. But – then again – you also don’t get offended when someone gives it a poor review either. After all, it’s not your work…

In fact, being a ghost writer has had the most positive experience on my own writing. Through my ghost projects, I’ve been able to try out new ideas that I would never dream of doing with my own work. I am also in the rather unique position of knowing what it is about my writing that people love without having to publish a book…

That is until now.

As I said, The Bluebell Informant is the first novel I can take credit for. And those years working as a ghost writer seemed to have paid off. People are fascinated by the main character of Detective Sergeant Evelyn Giles. They are thrilled by the fast pace and surprising twists of the story. And already people are crying out for the next instalment…

I guess it’s lucky that The Bluebell Informant is the second Giles story I’ve written, isn’t it? 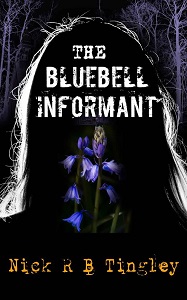 How do you catch a killer who is already dead?

One year ago, the Bluebell Killer killed his last victim. He was shot and killed, leaving behind a legacy of twenty corpses and a name that people will fear for years to come…

A year later, a man is shot in the back of the head and left in a field of bluebells. Is it a mugging gone wrong? A copycat killer? Or is the Bluebell Killer still out there, waiting to pounce on his next victim?

For DS Evelyn Giles the solution is simple – it’s just another dirty politician caught committing an unforgivable crime. But with the evidence stacking up against him, Giles’ suspect has one more surprise in store for her…

And his words will throw everything she knows into question…

The past is coming back to haunt DS Giles. She’s already sacrificed much for the lie. The only question is how much more will she suffer for the truth?

An ingeniously, gripping thriller, The Bluebell Informant is a dark, unexpected and emotionally charged debut.