Today on the blog we welcome author Rebecca de Saintonge, with her guest post ‘Publish your life story, you’re fair game for anyone who wants to have a go at you‘.

Publish your life story, you’re fair game for anyone who wants to have a go at you

I was warned about publishing a memoir, but I don’t think the hazards fully sunk in. For one thing, once it’s out there, it no longer belongs to you – YOU no longer belong to you – you and it are in the public domain and at the mercy of the press – or more particularly, the headline writers. And that’s the painful bit.

For me, writing ONE YELLOW DOOR presented particular challenges. I wasn’t interested in people knowing about me as a person, I had no desire at all to draw attention to myself in that way, but I had a story I wanted to tell because I hoped it would be helpful to others. The story was intimate – a love story, but also, in some people’s eyes, a scandalous one. It involved the last two years of my husband’s life as I nursed him through dementia, but survived by having a parallel relationship.

How could I manage to convey the complexity of loving one man to the utter depths of my being, but needing another to survive? Paradox. Muddle. Complexity. If this narrative was to have any purpose or power, I felt it had to be absolutely honest. No covering up the warty bits. But how to be honest without being cringe-makingly embarrassing? And could what I hoped was a subtle and tender tale, written with all the literary mastery I could summon, survive the crude onslaught of the tabloid press?

Perhaps most challenging of all was how to write about this sort of stuff in a way that was not throat-slittingly depressing. This was a love story. I wanted it to have laughter and light. Hope.

But there was yet another challenge. My husband Jack and I lived our lives against the background of a traditional Christianity, but as our suffering over the ten years of his illness progressed, my own sense of spiritual reality completely and utterly changed. I had to re-think everything I’d ever believed in and come out in a new place. That was to be a long and difficult journey. 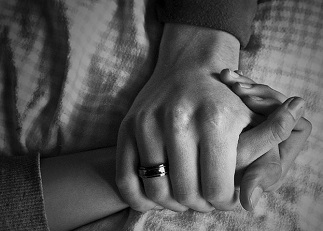 So here I was, 10 years after Jack’s death, wanting to write. All I had at my disposal was a daily journal I’d kept during those last two years – a journal I’d written creatively – i.e. not just in note form – partly to keep alive, since my career as a biographer had been put indefinitely on hold – and partly so that I could remember feelings and events to tell the psychologist who was helping me understand the particular form of bereavement you suffer when you love someone who dips in and out of dementia. Jack had Lewy Body Dementia. His brain was shrinking inside his skull, so that he gradually lost the use of all his faculties, but he remained, always, Jack. He was there, but he was not there. My first diary entry after the diagnosis read:

“So now my love, I know the worst. You are going to disintegrate very slowly, mind and body… and I will hold you to my breast and cradle the shell of your skull, for you will have gone, my lover, my dear one. But not quite.”

So, I had the diary, raw and quite powerful in it’s immediacy. But then, how to bring a lightness of touch, an ebb and flow to the story. How to bring changes of pace and mood into this difficult narrative? Indeed, how to make it readable?

I had three basic elements to play with: my life with, and love for, Jack; my very reluctant, but in the end life-saving relationship with another man and finally, the trajectory of a traditional faith that didn’t cut the mustard when the chips were down and was finally abandoned, and re-thought. This last element I wanted to treat very lightly, and only occasionally threading it through the text, as I absolutely didn’t want to put off secular readers. In fact, I hoped my journey would ring a bell with many who had been brought up in childhood to believe one thing, but had abandoned, or doubted those beliefs, later on.

But there was an unexpected thread of delight through all of this. We lived in a wonderful community of young and old, plumbers and artists, sane and wacky. Our back door never closed, and a host of often eccentric friends and neighbours wove their way in and out of our lives – including Fred who would turn up with a ferret in his trouser pocket (no, this is not a euphemism!). It was a while before we could work out the smell. In my journal I had interlaced the diary with anecdotes about them all.

So how to piece all these elements together. First I typed the three main narrative strands under their headings and then literally cut them up and put them on the floor, and then jiggled the sections around, interspersing one with another to try to get a sense of pace, of light and dark.

I also interlaced these sections with vignettes and anecdotes about our community, and backstories about my own childhood and the life Jack and I had lived in Zimbabwe after the war of Independence.

Piecing all the elements together was a nightmare. However, it gave me a crude skeleton to work on. For the next year or so, in between paid work, I worried away at the construction, and added more material of a lighter nature and developed the storyline so that it had an upward momentum.

It took five years to complete – on and off. And still I thought it was not publishable. A British agent said it was “too sophisticated” (whatever that meant). An American agent expressed interest, and then rejected it. O well, I thought, I’ll self publish. So, because I can’t spell, I sent it to a proof reader who surprised me by her positive response. Give it another go, she said.

I knew publishers rarely, if ever, took manuscripts straight from an author, but I knew of one publisher, Darton Longman and Todd, who had both a secular arm, and a spiritual arm, who published very brave manuscripts, cutting edge stuff. But how to attract them? I fiddled. I took a quote from the the main body of the text I thought might catch their attention, and stuck it in as a Prologue. I knew they’d read that first. I then wrote a synopsis exactly in the style they specified, and sent it off with an extract. They accepted by return of post. I was utterly gobsmacked. It just didn’t seem real.

When it was published last October, I was elated. But then the mud hit the fan; the headlines, even from the Guardian on line, were worse than I feared: “I had an affair while my husband died of dementia” and so on. The articles were fine, it was just the cheap attention grabbing headlines that were utterly shocking. But I’d been warned – once you’re out there, you have no control of what happens to your book, or your reputation.

My consolation has been the incredible response from the public, whose reading and understanding of the text was so much more subtle than the headlines, and whose moving accounts of their own experiences, both as carers and as those who found their beliefs severely challenged, has sustained me through dark moments. Many said they wept because at last they had been understood. One woman wrote; “You have given me the courage to live and love again.” I hang on to that.

“Why do people want to rush to judgement? The only important thing is that she has resolved what was going on in her own head. How lucky she was mature enough, and rational enough to make sensible decisions. This is a life enhancing story about how one person coped in a ghastly situation, let us hope it helps other people too.” – comment in the Guardian by ChickenOwner.

I never intended to write a memoir, and I never expected it to be published. And when published, none of us, including the publisher, expected it to get the publicity it did. So be warned! If you do publish your life story, in whatever form, you’re fair game for anyone who wants to have a go at you, – whether they have understood you or not. 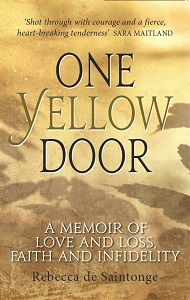 When Rebecca de Saintonge’s husband Jack developed an incurable degenerative brain disease she faced the dual challenge of trying to keep the integrity of their relationship intact while also avoiding her own destruction within their diminishing world. She survived by taking a lover.

Through extracts from Rebecca’s journal, One Yellow Door explores the conflicting emotions and complex ethics of infidelity in marriage where one partner is severely disabled. It is about a re-thinking of traditional faith and the discovery of a new, deeper spirituality, and ultimately about the indestructibility of love.