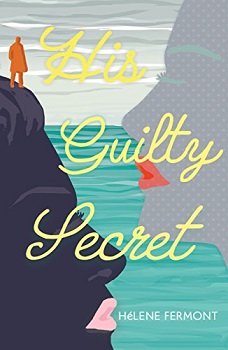 Secrets & Lies Are Dangerous When Jacques’s body is discovered in a hotel room his wife, Patricia, suspects he has been hiding something from her. Why was he found naked and who is the woman that visited his grave on the day of the funeral? Significantly, who is the unnamed beneficiary Jacques left a large sum of money to in his will and what is the reason her best friend, also Jacques’s sister, Coco, refuses to tell her what he confided to her?

Struggling to find out the truth, Patricia visits Malmö where her twin sister Jasmine lives and is married to her ex boyfriend. But the sisters relationship is toxic and when a family member dies shortly after, an old secret is revealed that shines a light on an event that took place on their tenth birthday.

As one revelation after another is revealed, Patricia is yet to discover her husband’s biggest secret and what ultimately cost him his life. His Guilty Secret is an unafraid examination of the tangled bonds between siblings, the lengths we go to in protecting our wrongdoings, and the enduring psychological effects this has on the innocent…and the not so innocent.

Jacques works for Air France and has been married to Patricia for ten years, he has also been having an affair with a married woman for a number of years too. When Jacques and his mistress meet up for a night of passion at the Hilton Hotel, Gatwick Airport, London, Jacques suddenly dies from a heart attack. Before collapsing, he manages to tell his mistress to leave so that their partners won’t ever know about their affair.

Patricia, now newly widowed is trying to come to terms with her husband’s death, but some things just don’t add up and secrets are being kept by those close to her, making her determined to discover the truth.

I found, His Guilty Secret, quite hard going and it took a while to get through it. I couldn’t connect fully with the writing style, nor the pace, yet I found the plot intriguing, even if I did know where it was leading us.

I was expecting a much faster plot, and for it to go in a different direction to where Ms. Fermont took her novel. This isn’t as much about a woman scorned, a bitter person trying to discover the identity of her husband’s lover. This is a book about life, people’s perspectives of happiness, of family rifts and of course grief and secrets.

This is a straightforward book. There are no twists, or big mystery reveals. What there is, is an attempt to understand the complexity of life via a story that slowly unravels itself. There are some likeable, realistic people whose lives we get to venture within and join on their journey.

This was a complex read which gave me plenty of mental nourishment.

I was born in Malmö, Sweden’s third largest city and beautiful cultural hub where I enjoyed an idyllic childhood, surrounded by beaches, parks and commons. My parental home was filled with music and literature and I started to write short stories which I entered into competitions when I was eight years old. Writing is my passion.

I moved to London in the mid-90s and the city has been my home for more than 20 years. Malmö is my native city and I regularly spend part of the year there surrounded by the beautiful landscape and tranquility which inspires my writing.

My debut novel Because of You was published in August 2016. The novel is inspired by my own visits to London during the 80s. The eclectic club scene was something that I was too young to appreciate fully at the time but it is emblematic of an exciting era that is now gone forever.

My second novel – We Never Said Goodbye – was published on the 6th April 2017 and my third – His Guilty Secret – is also out now in paperback and eBook.

Prize is one paperback copy of His Guilty Secret. Open to UK residents only.