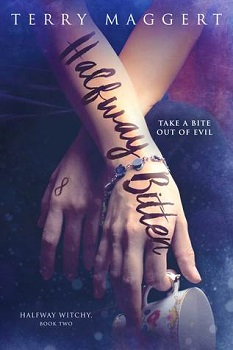 The circus came to Halfway, and they brought the weird.

When clowns, vampires, and corpses start piling up in town, Carlie has to break away from her boyfriend, Wulfric, to bring her witchy skills to the table- or grill, as the case may be.

When the body of a young woman washes up in the lake, it unleashes a spiral of mystery that will bring Carlie, Gran, and Wulfric into a storm of magical warfare. Spells will fly. Curses will rain. Amidst it all, Carlie will make waffles, protect her town, and find out if a man from the distant past can join her in happy ever after.

With love and honor at stake, Carlie has no peer.

This novel is the second in the ‘Halfway Witchy’ series by American novelist Terry Maggert. It is written in the first person and we see the action through the eyes of Carlie the main protagonist. It is set in the small fictitious mountain town of Halfway where reality and fantasy collide and which Carlie describes as her ‘cradle and keeper’.

The cover has a striking design which I think will stand out from a crowded page, vying for the attention of the casual browser.

As a character, Carlie has a lot of depth and there is a distinct contrast between the normality of her daily life and her supernatural skills; one minute she is cooking food in the diner and the next, using her witchcraft skills to cast powerful spells. I struggled a little at the beginning to reconcile these diverse concepts but the discovery of the first body pricked my interest.

New characters are introduced gradually which avoids confusion and the need to reread sections. Over time, we encounter shape-shifters and necromancers, clowns and ghosts as well as forest dwellers and a plethora of vampires, as supporting cast. Wulfric, Carlie’s partner is part of the tale from the beginning but we do not meet him immediately, though we are introduced to Carlie’s nemesis, Anna and her brother Alex.

The action moves along at a consistent pace with the plot building nicely and the fertile imagination of the author allows Carlie to explore and expand her abilities as a witch, under the tutelage of Gran.

There is a degree of irony with Carlie’s compact stature causing her to be self-deprecating on more than one occasion. There is also direct humour and an effective use of similes to help build the scenes.

This is very much an escapist story incorporating a murder mystery as a backdrop with the main theme being good fighting evil, albeit through unorthodox methods.

I have not read ‘Halfway Dead’ the first book in this series but ‘Halfway Bitten’ is equal to the task of standing alone as a complete story.

If you enjoy suspending reality and escaping into the world of the paranormal, then I recommend this book. It is intuitively written with attention to detail and has a tight structure, although the basic premise of vampires feeding on human blood in all corners of the earth is arguably pushing the boundaries.

Nevertheless, Terry Maggert is a skillful author who has delivered a gripping story. I was planning an award of four-and-a-half stars but the strong climax had me racing through the pages and elevated my score to a maximum five.

Born in 1968, I discovered fishing shortly after walking, a boon, considering I lived in South Florida. After a brief move to Kentucky, my family trekked back to the Sunshine State. I had the good fortune to attend high school in idyllic upstate New York, where experienced a mythical event known as “seasons”.

After two or three failed attempts at college, I bought a pub. That was fun because I love beer, but, then, I eventually met someone smarter than me (a common event), and, in this case, she married me and convinced me to go back to school–which I did, with enthusiasm. I earned a Master’s Degree in History and rediscovered my love for writing.

My novels explore dark fantasy, immortality, and the nature of love as we know it.

I live near Nashville, Tennessee, with the aforementioned wife, son, and herd, and, when I’m not writing, I teach history, grow wildly enthusiastic tomato plants, and restore my 1967 Mustang