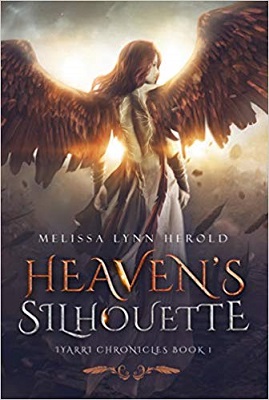 When I was little, other children called me a monster. A painting proved them right.

A lifetime of cruel taunts and heartbreak has taught Aurelia to hide, to not get too close to anyone. A painter and gallery docent, her only solace is in the art that can’t stare back. When a new piece arrives, depicting an angelic figure who shares the physical features she’s always thought of as monstrous, Aurelia searches for the artist, determined to get the answers her mother has long refused to provide.

But she isn’t the only one searching. There are others who want the artist–and the truth–silenced. Aurelia is attacked by figures from the painting, fierce warriors with wings and sharpened blades. Shaken and bloody, she manages to escape with her life but finds herself hunted by the Iyarri, who are anything but angels. As she comes to terms with her connection to them, Aurelia is drawn deeper into the heart of a millennia-old struggle. If she’s not careful, the consequences will tear her body, her heart, and the Iyarri in two.

Aurelia works at an art gallery. One afternoon she notices a new painting on display depicting a winged creature similar to an angel. She notices that the ‘angel’ has similar traits to herself such as only three toes on each foot. Whilst looking at the painting the artist Stephan comes over to talk to her. He is soon joined by another man who seems very interested in the painting and the words that have been written on it.

In the afternoon Aurelia notices that the painting is gone. She discovers that the painter asked for it to be removed and that he was coming to collect it that evening. Intrigued to know more, Aurelia is happy to wait for him. However upon loading the painting into his vehicle the ‘angel’ depicted in the painting makes an appearance and he isn’t happy, in fact, he attacks Stephan killing him and nearly killing Aurelia in the process. She is saved by the man who she had seen talking to Stephan earlier – Lucian.

Lucian takes her to a safe place and explains that the winged creatures might look like angels but they most definitely are not, they are a race called Iryarri. They can disguise themselves to look like humans, they are not immortal and they will kill anybody who knows about them, including Aurelia. His next words shocked her to her core. She is half Iyarri and half-human, the only one known to exist and the Iyarri will stop at nothing to kill her.

Heaven’s Silhouette starts strongly and right into the action. Aurelia has had a hard childhood, because of her features including three toes on each foot her school friends and neighbours taunted her and believed she was a monster. When she sees the painting in the gallery with the winged creature she finds that she has an instant connection to it and wants to know more. However, she never thought she would learn about a race of evil, angel looking beings.

The plot moves along at a nice pace and I liked the interaction between Aurelia and Lucian. However, whilst Lucian was the heroic type, Aurelia was the bumbling sit in the corner and cry type. In real life we might just do the same knowing that some creatures are trying to kill us, however, this is a fantasy book and I was hoping that Aurelia would grow as a person and become some kick-ass heroine. Also being a fantasy I wanted there to be some kind of special way that these beings could be killed, but no they are just like humans and getting shot works.

Most of the book focuses on Aurelia and Lucian on the run. However, as the book progressed the scenery did change when Aurelia meets her father – An Iyarri. There was a major villain in the plot but I’d worked out that element of it just a few chapters in, unfortunately, although this didn’t take anything away from my enjoyment of the story.

Overall if you enjoy fast-paced fantasy books then this is the book to read.

Melissa Lynn Herold is artistically-talented, scientifically-minded, and magically-fascinated, something that manifests in both her fiction and nonfiction. An herbal alchemist, Melissa owns and runs NightBloomingwhere she blends up herbs and oils that grow real-life fairytale hair and has published two nonfiction books, Rehabilitating Damaged Hair Naturally and Coloring Hair Naturally with Henna & Other Herbs.

Melissa’s debut into published fiction is the darkly immersive Heaven’s Silhouette, her debut novel and the first book in the Iyarri Chronicles (September 17, 2019).

She lives with her husband in a sweeping river valley with their mutinous cats and garden dotted with honeybees.