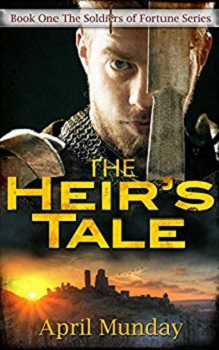 The Heir’s Tale
The Soldiers of Fortune Book One

Four brothers – one battle that changes everything.

1357 Ancelin Montfort returns to England as his father’s heir, following the death of his older brother at the Battle of Poitiers. Everything he does from now on is to prepare him to be the Earl of Somerton, even marrying the woman his father has chosen for him.

Emma has loved Ancelin through the months of his absence, but the man who has returned from war is not the man who left. As the day of their wedding draws near she wonders if she ever knew him at all. Then he accuses her of betraying her with another man. Can she convince him of her innocence? Does she want to?

What a lovely book! I was pleasantly surprised how much I enjoyed it as I haven’t read a lot of historical fiction, also this was my first read by April Munday.

There are four books in this series and this is the first. The series follows four brothers after the Battle of Poitiers in 1356. The first book in the series is about Ancelin Montfort return from France in 1357, returning to become the Heir to his father’s Estate having lost his eldest brother John. He also is coming home to Emma his betrothed and Alice, his brothers widow.

This is a historical fiction with a very good description of life in the 14th century written with Ancelin as the the main character and his struggle with power and love. We get to know the Earl and his strong love and bond with future daughter-in-law Emma, I like this close relationship and how they bonded whilst being at home waiting for the men to return from war.

Joan is Emma’s lady-in-waiting who is by Emma side 24 hours a day, for most of us today an idea we could not imagine! Then there is Alice a forced to be reckoned with who will stop at nothing regarding every matter.

The style of writing makes it a very easy read and fast paced. It was certainly a good page turner and I had a job to put it down! The plot unfolded nicely and I was not able to picture the outcome of the story, well done to the author.

I would highly recommend April Munday’s book and I look forward to reading the following books in this series, or other books written by this author.

April Munday has been telling stories for almost half a century. It started as a way of keeping her younger sister entertained and out of trouble while they were on holiday.

In her early teens she started writing stories down. Many years later she finished one and then another. When she wrote her first story set in the fourteenth century she knew that she had found her home.

Her romances are set either in the fourteenth century or the early nineteenth century. Her latest series, The Soldiers of Fortune, is about four brothers whose lives are changed by the Battle of Poitiers.