Hello, I Must Be Going by Dyan Sheldon – Book Review

Hello, I Must Be Going by Dyan Sheldon – Book Review 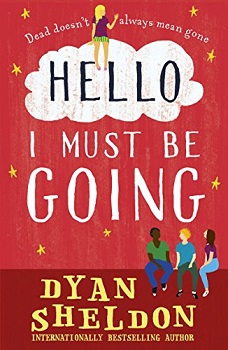 Hello, I Must Be Going

Celeste and Sorrel, Reuben and Orlando: high school friends who hang out together all the time. When Sorrel gets hit by a car one rainy night, it’s not surprising the others fall apart in various ways. But it’s not just grief they’re struggling with – it’s parents.

Unfair, demanding, challenging parents who are, quite frankly, making their lives a misery. That’s why Sorrel decides she’s not going to be properly dead till she’s sorted out her friends’ lives and can leave them with a clearer sense of what they want out of life.

From the bestselling author of Confessions of a Teenage Drama Queen, this is a tender comedic ghost story which touches on some important issues, like bullying, coming out, and the life-denying way the old want to live through the young and impose their failures on them. It’s about the importance of being the person you want to be – or else, being miserable.

Sorrel, Celeste, Rueben, and Orlando have been friends for a long time. Just after her eighteenth birthday Sorrel is hit by a car during a storm and instantly killed. The three friends are obviously grief-stricken, so when they start seeing Sorrel in various weird outfits and in strange places, they individually believing that they are hallucinating.

It soon becomes clear that Sorrel hasn’t passed over to the ‘other side’, she has chosen to stick around and help each of her friends deal with issues, especially their parents.

Celeste’s mum has a ‘what about me?’ attitude. She relies on Celeste for everything, from cooking, shopping to babysitting. Even if Celeste has other things booked, her mum believes that her life is more important. She also doesn’t like Celeste and her lazy, bone idle sister, seeing their father and plays the emotional card if they want to.

Rueben’s mum is a famous author, yet she has a fear of electricity after her husband was killed by a lightning strike. She has become a recluse and won’t leave the first floor of their home, nor use any electricity.

Orlando’s dad is a police officer and expects the best from his son all the time. He is super strict. Orlando’s brother died a few years ago and he want’s Orlando to take his brother’s place and become a brilliant sports star. Orlando would rather be dancing, but his dad won’t hear of it.

After Sorrel spent years being pushed around by her mum, she doesn’t want the others to do the same, she wants them to live their lives, especially now that she can’t live hers.

I would say the book is marketed towards the younger end of YA readers. Whilst the book deals with some serious issues, none are really mentioned in any depth and the story is more of a gentle, easy read.

The plot is told in the third person and mainly from Sorrels view. Although the three friends see Sorrel and have conversations with her, neither of them tells the others, so the stories are all kept separate. Plus it was strange that none of them were happy to see her, telling her to go back to the other side and leave them alone – I’m not sure how many people would really do this if they got to spend time with someone who had died.

Some might think that this book is about parent bashing, but being the mother of three boys ranging from 12 to 21, I can honestly say that I disagree with the way the parents treated their children – with the exception of Rueben’s as she clearly was going through some kind of mental issue, most likely brought on my depression after the death of her husband.

Hello, I Must Be Going is an interesting read and one I’m sure younger adults or older children will most likely love. I’m more used to books with depth to them and I suppose a plausible storyline. However, it was a welcome change to read something different from the norm.

Dyan Sheldon is the author of many novels for young adult readers, including the #1 New York Times bestseller CONFESSIONS OF A TEENAGE DRAMA QUEEN, which was made into a major motion picture. American by birth, she lives in North London.