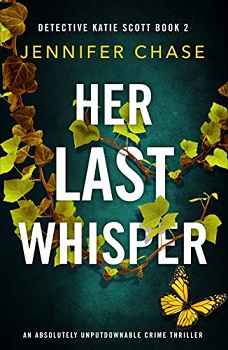 Katie focuses her mind, trying to keep another anxiety attack at bay. The victim’s long brown hair is slick and wet, her body rigid in the grass. She looks more like a mannequin than the woman Katie had spoken with only yesterday, the woman she had promised to protect…

When a cold, naked body is discovered by a couple on a jog through the lush woodlands of Pine Valley, California, new recruit Detective Katie Scott is stunned to discover the victim is Amanda Payton – a much-loved local nurse and the woman at the heart of an unsolved case she’s been investigating whilst getting a grip on her crippling PTSD.

Weeks earlier, Amanda had run, battered and bruised, out into the headlights of a passing patrol car. She claimed to have just escaped a kidnapping, but with no strong evidence, the case went cold. The Pine Valley police made a fatal mistake…

Katie is certain the marks on Amanda’s wrists complete a pattern of women being taken, held captive and then showing up dead in remote locations around Pine Valley – and she won’t let someone die on her watch again.

But then a beautiful office worker with a link to the hospital where Amanda worked goes missing. With only days before the next body is due to show up, can Katie make amends for her past by saving this innocent life?

Back in June I reviewed Jennifer Chase’s first book in the Detective Katie Scott series, ‘Little Girls Sleeping‘ and absolutely loved it, so when I heard book two, ‘Her Last Whisper’ was out I just had to read it.

The series follows ex-army officer Katie Scott who now works for Pine Valley Police Department as a detective. In book two Katie is assigned to the Cold Cases department to see if she can find any new leads on cases that were filed away months or years early and where nobody was charged with an offence.

Whilst going through the files she comes across a case that is only six-months-old. The kidnapping of Amanda Peyton. Amanda was discovered one night by two officers whose car she ran in front of. She was distressed and told the officers that she had been kidnapped, but the location she gave the officers could not be found and without any other evidence, the case was closed for the time being until new evidence was found.

Katie is not happy with the way the case was handled and decided to make it her first cold case to work on. On talking to Amanda she discovers that Amanda believes her kidnapper is watching her, waiting to pounce again. Katie also discovers that evidence taken from Amanda on the night was not processed nor did anyone search the location she gave thoroughly. She was dismissed as being mentally ill.

Katie’s leads take her to an asylum where a woman claims to have no memory of who she is, but her case is similar to Amanda’s, could the cases be related? Does the woman really not know who she is or is she pretending to protect herself? And who is leaving Katie notes telling her whether she is on the right or the wrong trail?

Detective Katie Scott is a fabulous character. Although she is a detective, she was in the army for so long that she thinks more like a soldier. She also has her old partner and service dog Cisco with her who is always on alert and ready to protect Katie at a moment’s notice.

The plot for ‘Her Last Whisper’ is harrowing, women being attacked from behind, knocked unconscious, blind folder and taken to an unknown location. The kidnapper rarely speaks to them except he when he wants his victims to ‘tell him the truth’ and gets off on hearing their confessions.

Katie is trying to put all the pieces of the puzzle together and has a few suspects in her sights, but she is concerned that someone is playing games with her too.

The book is filled with twists, turns, and red herrings and kept me on the edge of my seat, especially the snippet sections from the kidnapper/killer who seemed to be very calculating and unhinged.

Just like with the first book I was invested from the first page to the last wanting to know who the culprit was and why he was targeting these women. I raced through the pages needing to know more. The conclusion whilst not a complete surprise was certainly fulfilling.

If you love detective thrillers then this series is amongst the best out there, believe me, I have read a lot of them. I would highly recommend ‘Her Last Whisper’, however, although I believe it could be read as a standalone to understand Katie and her way of thinking you really need to read book one first.

Jennifer Chase is a multi award-winning and best-selling crime fiction author, as well as a consulting criminologist. Jennifer holds a bachelor degree in police forensics and a master’s degree in criminology & criminal justice. These academic pursuits developed out of her curiosity about the criminal mind as well as from her own experience with a violent psychopath, providing Jennifer with deep personal investment in every story she tells.

Jennifer Chase was born and raised in California and still lives there with her husband, dogs and cats. In addition to writing and consulting, Jennifer enjoys spending time outdoors, both at the beach and hiking, and engaging in some amateur photography.