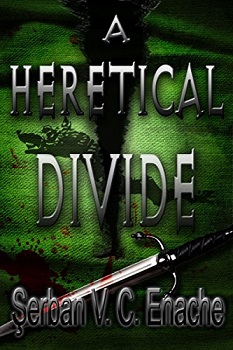 A Heretical Divide picks up right where An Empire Of Traitors left off.

The Inquisition proves itself a hydra of murderers and schemers. Unwittingly, Drakanes is part of it all. Findley’s wit and brawn are put to the test in his search for the elusive prince Yoffis. The ram’s war in the Winterlands against Holton Brax goes well up to a point. And the hawk’s vengeance comes to the devil’s home under sorcery and ploy.

Even with a new emperor, the Sun Throne’s vassals are still brewing; each house following its own petty interests. While at sea, Neezor Arrtrofis performs blasphemous rites ahead of a great raid he aims to organize. Having no say in the matter, Akilah and Sycarus follow the pirate lord along his journeys.

Find out how it all unfolds by reading A Heretical Divide, the second book in the series Of Hate And Laughter.

I struggled to finish this book, truth be told – I’m not sure I have the right staying power for fantasy epics any more!

This book reminded me a lot of the Song of Ice and Fire series (Game of Thrones, to us non-purists who give the series its more obvious title rather than the correct one) for a few reasons. Each chapter is told from the perspective of a different character and the overlying theme is one of religion and politics. Also, there’s the occasional wyvern or centaur thrown in.

My first words of advice: don’t be put off by the prologue! This first chapter is written in a really unwieldy way and barely made sense to me, making me wonder exactly what I’d picked up but as soon as you get into the main story, the language settles into understandable levels of old-fashioned English why a few ‘thys’ and ‘thees’ thrown in for good measure.

There are far too many characters in this book to keep a close track of, though I found I could get by on context alone most of the time. The trouble is, none of the characters are particularly well developed or likeable – the strength of this story lies in the world building and political intrigue. As a lover of complex characters that I can really bond with, I think it’s obvious where this book lost me!

The sexual content of this book was uncomfortable at best and plain violent in most cases, so this is something to be wary of if you prefer to steer clear of those issues – similar to Lord of the Rings, the female characters aren’t the most empowered and for the most part get thrown about a bit by men, destiny and the clergy.

It was about two thirds of the way in that I realised that I still didn’t know what the point of the story was… there’s no sense of destination for any of the characters, some of them are looking for revenge and others for power etc, but once they get it they just move on to the next trial, and then the next, and the next. There’s no driving storyline that brings them all together, and given that this is the second book in the series I was expecting to have an idea of the bigger picture.

It sounds like I really didn’t enjoy the book and that’s not the case, the world building in this book is exquisite and as far as I could tell, the tangled web of political intrigue didn’t have a single plot hole. My rating for this book is based on personal preference alone rather than issues with the writing style. This is a series to enjoy for its own sake, immersing yourself in the world that the author has created and enjoying the ride – just be prepared to take notes to keep all the names straight in your mind!

Born on March 25, 1989, Bucharest/Romania. Single parent child. I blame my mother for the long name. Licensed in journalism. Creator of the Of Hate And Laughter series.

This universe is one of infernal majesty; it’s my heart and soul. If it matters to anyone, my sun sign is Aries, moon sign is Scorpio, mars sign is Gemini. I don’t believe in astrology, by the way ^_^ My interests are: MMT (modern monetary theory), politics, history, literature, tv-shows, movies, games, music (from epic soundtracks to gothic metal), and I enjoy walking the green and concrete.

I’m a deficit owl and social progressive. I’m also pretty good at drawing. My favorite author is Garth Marenghi (look him up). My favorite comedian is George Carlin. My favorite sitcom is NewsRadio. My favorite actor is Phil Hartman.