Him With The Beard by Pernille Meldgaard Pedersen – Book Review

Him With The Beard by Pernille Meldgaard Pedersen – Book Review

Him With The Beard

Do you remember that moment you stopped believing in Santa Claus?

When nine-year-old Mille suddenly no longer believes in Santa Claus, it turns the house upside down. Her mother, Stella, is in a pickle as the hunt to find Santa Claus unearths some family secrets.

Christmas is at risk! And there’s only one person who can save it.

Nine-year-old Millie has stopped believing in Father Christmas. Her mum Stella is devastated and tries everything to convince her daughter that he is real. She is not helped by her husband confirming the truth to Millie.

I have very mixed feelings about this book. It is short and punchy and certainly festive and the book moves along at an even pace and I got through it within an hour. It covers scenes that I’m sure all those with children have had to face at some point, the disbelief in Santa. However, I did find the scenario of a grown woman still believing in Father Christmas and getting angry with her mother when she confirms that he’s not real a little too far fetched.

There was also the issue of the way her daughter spoke to her, like a stroppy moody teenager. I’m not convinced a nine-year-old would speak like that, certainly not the children I know and I’m from a huge family, either that, or we are extremely strict. Because of this, it made me really dislike Millie and I felt sorry for Stella.

If you are looking for something Christmassy and short to read then give it a go as it is a decent festive read. Perhaps I’ve just turned into the Grinch!!

Pernille was born in 1988 and loves that she was born in the decade with the tallest hair, the most colourful clothes, and the best music.

Her imagination never stands still, and it’s often expressed in words and pictures. She wrote her first story when she was six years old. It was about the cat she unfortunately never got but wished for more than anything.

She loves autumn and Christmas and believes in elves. From day to day she is a knight in training, an animator, and a secret agent – she has saved the world a few times by now.

She’s also a professional daydreamer. She thinks the recipe for a good book is the same as the one for having a good life – a sense of kinship, humour, love, and that one thing that gives you a daily smile.

Vestercity is a fictional city based on her upbringing near the city of Herning in Denmark. 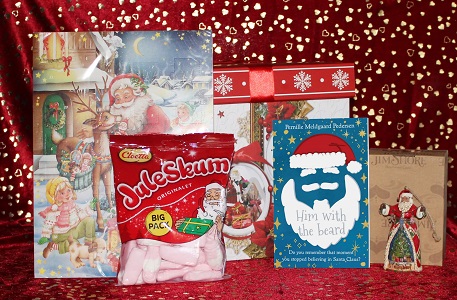 Win A Cosy Christmas Pack – with One Jim Shore Santa Claus Ornament, Santa Claus Marshmallows, A Chocolate Advent Calendar, A Pretty Christmas Storage Box and finally, A Signed Copy of my book Him With The Beard. Open internationally.