I Wish For You by Camilla Isley – Book Review

I Wish For You by Camilla Isley – Book Review 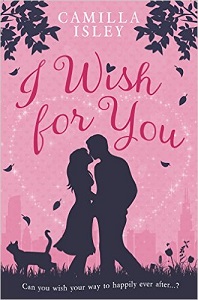 If all your wishes could suddenly come true, what would you do?

A year ago when the love of her life dumped her for no apparent reason, Ally thought she had hit rock bottom. But now that she has seen him with another woman, and one she knows only too well, her life seems to have reached a whole new level of low.

Yet, when she stumbles across an ancient object infused with magical powers and a stranger with a dark past appears out of nowhere promising to grant all her wishes, she finds herself hoping again.

Suddenly Ally’s life is turned upside down; she has a mystery to solve, a rival to beat, a millenarian curse to break, and well, she wants to have some fun playing with her new “gifts”…
But can she wish her way to happily ever after?

Ally is still grieving for her ex-boyfriend James, even though its been a year since James ended the relationship.

Whilst out shopping at a flea market with her mum, Ally comes across a small box that she is drawn to. The little old woman who is running the store tries to give Ally the box, but Ally backs off and leaves without taking it.

When she returns home, she finds the box all wrapped up in her handbag. After a closer inspection of it, she notices a dial which she turns and a puff of smoke fires in her face.

Then comes the shock of her life; There is a man sat in her apartment, who wasn’t there a minute ago. He introduces himself as Arthur and says she has opened the coffer, now he must grant her five wishes.

Join Ally and Arthur on a journey as Ally chooses her wishes, and Arthur gets used to life in the 21st century.

"I Wish for You", is modern version of a fairy tale.

It is pure Chick Lit and although I was initially sceptical about the whole ‘wishes’ plot, I found myself engrossed in the pages and loving the story.

Ally is a woman who is led by her heart. She wants her ex-boyfriend back at all costs, even though he is with someone else now.

She has a heart of gold and wants to help others, but at the same time, wants to destroy James’s new girlfriend.

I loved Ally, she’s warm and easy to connect with, and a very likeable character. I loved her sense of humour. I also felt sorry for her, in the respect that she is still harbouring such emotions for her ex, that she is constantly living in the past, rather than living in the now.

Arthur, or the Genie as Ally calls him, was cursed many hundreds of years ago by a witch. He is wonderful, with his old English vocabulary and mannerisms. He doesn’t understand any modern day technology, from computers to aeroplanes, creating lots of hilarious moments. I found him incredibly witty and funny, especially for someone many hundreds of years old.

There were some corny and predictable moments, and from the off, I had already worked out the end and how the curse would be broken, but that didn’t take anything away from the story, in fact it increased my interest, as I wanted to know every detail of how the plot would build up to the final chapter.

The book is beautifully written and had me hooked right from the start. The plot absorbed me in the pages and I read it within two days as I needed to know what events would happen in each chapter. I read it whenever I had some free time, and sometimes when I was supposed to be doing something else, but that’s between me and you!

This is Camilla Isley’s first novel, and one I think she should be very proud of. I hope she goes on to write many more, and I would love to hear more from Ally and Arthur, as I think their story has so much more to give, especially as I found myself thinking about them, long after I had finished reading.