In Search of Us by Ava Dellaira – Book Review

In Search of Us by Ava Dellaira – Book Review 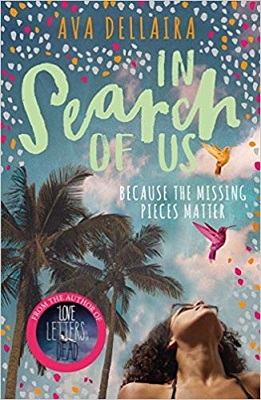 In Search of Us

Because the missing pieces always matter . . .

Marilyn is in search of freedom. She grew up as a child actor, her mother’s meal ticket out of mediocrity. But it’s been a long time since she booked a job, and she and her mother have no choice but to move in with her volatile uncle.

Marilyn is counting down the days until she can escape to college, and the promise of her own future. That is, until she falls in love with James, the boy downstairs, who shows her that her life is worth living in the present. At 17, Marilyn is about to learn that everything can change in an instant.

Angie is in search of answers. She is mixed race and has never met her father, but she knows she looks and thinks a lot like him. Though Angie grew up with her devoted mother, Marilyn, she’s always felt the absence of the man she never knew.

But after discovering that her mother has been lying to her, Angie sets off on a road trip to Los Angeles, in search of an unknown uncle – and maybe even her dad. At 17, she hopes to finally find out the truth about where she came from so she can discover who she truly is.

Told in two perspectives, Marilyn’s in the late 90s, and Angie’s today, IN SEARCH OF US is a sweeping inter-generational story about mothers and daughters, love and loss, holding on and letting go.

In Search of Us is the story of Marilyn and Angie told from two points of view and two different timelines. We first meet seventeen-year-old Angie as she sets out on a road trip to Los Angeles after she discovers that her mum has been lying to her for years about her father. We then go back in time to when her mum Marilyn was herself just seventeen.

Marilyn lives with her mum and her uncle in Hollywood. Her mum tells people that her daughter is a star nearing her big break and that is why they have moved from the suburbs, not quite the truth. The truth is that they have little money and not enough for rent and so they move in with Marilyn’s uncle. Marilyn had indeed been a small star as she made money from being in commercials but when the work dries up her mum wants her to become a model. Marilyn just wants to go to college to study art history and has an eye for photography. She also has a thing for her new neighbour James.

The different points of view come at random times. They are not alternative chapters but more like 6/7 chapters between each POV. You get to meet both women as young seventeen-year-old women and then see how Marilyn’s life turned out via her daughter Angie’s sections.

The book was really easy to read. It had a natural flow to it and I found myself becoming involved in both women’s lives, although, I felt more of a connection to Marilyn, that is more likely because I grew up in the same era as her, although different countries, so the references to music, food, even her Walkman we all things from my past too.

This is a story about two women trying to find themselves in very different ways, although they both dreamed of getting away from their mothers. I liked the way the women were given their own unique personalities and how they both spoke their minds. I did feel sorry for Angie discovering the truth about her father rather than hearing it from her mother. I also found myself wanting to wrap my arms around her as she struggled with her identity as a mixed-race young woman and never knowing her father.

The book is beautifully written and is certainly emotional in places as it does tug at your heart-strings. It slowly shows the world through the eyes of two realistic and likeable characters. In Search of Us is a contemporary fiction, so there aren’t any big shocks, twists or turns but what you do get it a thoughtful, engaging story. The ending completed the story perfectly too.

I was born in Los Angeles. One of my first memories is of looking out the window of the black Cadillac that my family drove across the wide-open desert when we moved to Albuquerque, New Mexico, which is where I grew up, and where my sister and I spent countless summer afternoons making fairy potions, battling evil witches, and playing other imaginary games that probably contributed to my proclivity to make up stories.

I now live with my husband, and spend my days writing in neighborhood coffee shops, in bed, in my shoebox office in our condo. I love the LA palm trees, especially the really tall ones that bend in the wind. I love how when a new album comes out, you hear it pouring from car windows all over the city. While I was at work on my new book, In Search Of, I spent a lot of time wandering around Los Angeles with my headphones on, listening to James and Marilyn’s music, and to Angie’s, imagining them in the same spaces where I found myself.

What did you think of In Search of Us? Share your thoughts in the comment section below!