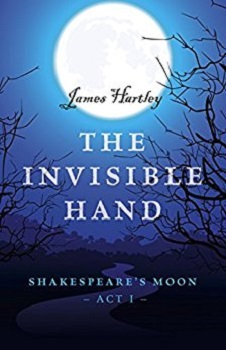 The Invisible Hand is about a boy, Sam, who has just started life at a boarding school and finds himself able to travel back in time to medieval Scotland. There he meets a girl, Leana, who can travel to the future, and the two of them become wrapped up in events in /Macbeth/, the Shakespeare play, and in the daily life of the school.

The book is the first part of a series called Shakespeare´s Moon. Each book is set in the same boarding school but focuses on a different Shakespeare play.

Sam is new to boarding school and whilst during the day his life takes on the dullness of his studies, his nightlife finds him time-travelling.

Every time Sam goes to sleep he awakes in Medieval Scotland. Sam believes that he is having very vivid dreams until he meets a young girl called Leana, who seems to think he is a demon. Then Leana turns up at the school as a new student. It would seem that the two can time travel, Sam into the past, and Leana into the future.

Back in Medieval Scotland the two find themselves mixed up Macbeth’s life, just as in the Shakespeare Play.

Macbeth is the only Shakespeare play that I fully know, having had to study it in some detail back in my school days. However, I haven’t actually read it in about 25 years, so it was nice to return to the ‘Scottish Play’.

For the first six chapters we get to find out about Sam, why he is at boarding school and life back home. This part is quite slow going. Though Sam had visited Medieval Scotland a few times during these chapters I was starting to wonder when a link to Macbeth would be added.

Once Leana appears in the present day, my interest perked up as the story was now heading in the direction I had been waiting for. It took some time to get there, but being book one in the Shakespeare’s Moon Series, this was to be expected.

I’m not really of the relevant age that this book is aimed at, as I would say those of high school age were the target audience, but I could see the potential it had to help those studying Macbeth. Shakespeare’s work can be quite daunting to some children, as well as hard to understand, but this book certainly helps to give kids the information they maybe missing from the play. This isn’t a study guide though, so please don’t use it as one.

The interactions between the two main characters was quite sweet and their time-travelling was what kept the story alive, though as the story progressed, the travelling seemed to slow down, which was a shame.

Overall, it is an interesting book with elements of mystery, time-travel, battles, a hint of romance and lots of adventures to keep you hooked to the pages.

James was born on the Wirral, England, in 1973 on a rainy Thursday. He shares his birthday with Bono, Sid Vicious and two even nastier pieces of work, John Wilkes Booth and Mark David Chapman.

His mother was a hairdresser with her own business and his father worked in a local refinery which pours filth into the sky over the Mersey to this day. They married young and James was their first child. He has two younger brothers and a still-expanding family in the area. As an Everton fan he suffered years of Liverpool success throughout the seventies and was thrilled when his father took a job in Singapore and the family moved lock, stock and two smoking barrels to Asia.

He spent five fine years growing up in the city state before returning to the rain, storms, comprehensive schools and desolate beauty of the Scottish east coast. Later years took he and his family to baking hot Muscat, in Oman, and a Syria that has since been bombed off the surface of the planet.

James studied journalism in London and later travelled through Ireland, France, Germany and India generally having a good time, before finally settling in Madrid, Spain, where he now lives with his wife and two young children.

James loves writing and reading – the former a compulsion, the latter a pleasure – as well as running, boxing, eating, drinking and trying to see, and enjoy, the good things in life. 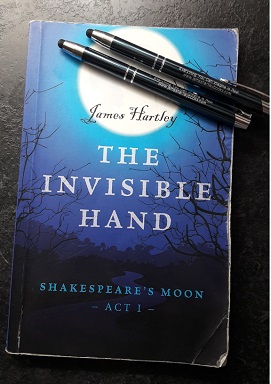