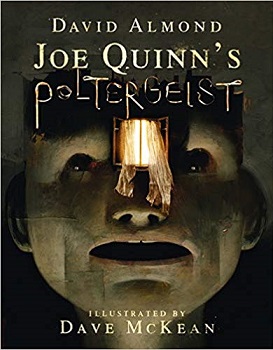 A dark, powerful and moving short story from the internationally acclaimed author of Skellig.

Joe Quinn tells everyone about the poltergeist in his house, but no one believes him. No one that is, except for Davey.

He’s felt the inexplicable presence in the rooms, he’s seen random objects fly through the air. And there’s something else … a memory of his beloved sister, and a feeling deep down that somehow it might be possible for ghosts to exist.

Davey doesn’t really like Joe Quinn as Joe is one of those boys who always makes things up, like he has the best things or does the most amazing things. He likes to tell little white lies in an attempt to get people to like him.

One afternoon whilst Davey and his friend are watching the girls play tennis Joe appears and tells them that he has a Poltergeist in his house and asks him and his friend round for tea to see it in action. The two friends don’t believe him so they decided to go and take a look for themselves.

At first, it’s noises, then bread flying above their heads. Soon Mrs. Quinn is becoming restless and yelling at the poltergeist to stop. Davey and his friend leave not sure what they have witnessed. Before going Mrs. Quinn asks Davey to ask the local priest to attend her home to rid it of the spirit.

Whilst Davey isn’t convinced that it wasn’t Joe making things move, part of him wants it to be real as it means that his younger sister that died could be out there somewhere.

I’m not much of a graphic novel reader, I think this is only the second or third I have read. However, I feel that this book worked because it was written in graphic novel form.

Davey is a teenager who has been through a lot with the death of his sister. He’s not sure he believes in the afterworld or in God but he wants to believe so that he knows that his sister isn’t really gone for good.

The book reads as if the author David Almond wanted to express his thoughts on his past and especially as in the introduction he tells us about the death of his sister Barbara at just one year old. It feels like this book was a kind of fictional memoir for him, as if he’s trying to express his younger years or even come to terms with them.

The dialect in the book is very northern so if you are not used to the way we northerners speak you may struggle with some words. It’s also set, I would guess, around late 70’s early 80’s judging by some of the references – Such as, front doors left open and stripy plastic curtains dangling to keep the flies out.

The illustrations really bring the book to life and made it so enjoyable to read. They capture the moments and the feelings of the characters perfectly. They also give the book that edgy feeling.

My only tiny criticism is that I don’t think the cover does the book justice. I know we shouldn’t judge a book by its cover but people do and I don’t want people to be put off buying this book based on the cover as it really is worthy of reading. It might be called Joe Quinn’s Poltergeist but it’s not a scary book, it’s a book that makes you stop and think about life.

David Almond is a British children’s writer who has penned several novels, each one to critical acclaim. He was born and raised in Felling and Newcastle in post-industrial North East England and educated at the University of East Anglia. When he was young, he found his love of writing when some short stories of his were published in a local magazine. He started out as an author of adult fiction before finding his niche writing literature for young adults.

His works are highly philosophical and thus appeal to children and adults alike. Recurring themes throughout include the complex relationships between apparent opposites (such as life and death, reality and fiction, past and future); forms of education; growing up and adapting to change; the nature of ‘the self’. He has been greatly influenced by the works of the English Romantic poet William Blake.

He is an author often suggested on National Curriculum reading lists in the United Kingdom and has attracted the attention of academics who specialise in the study of children’s literature.

Almond currently lives with his family in Northumberland, England.