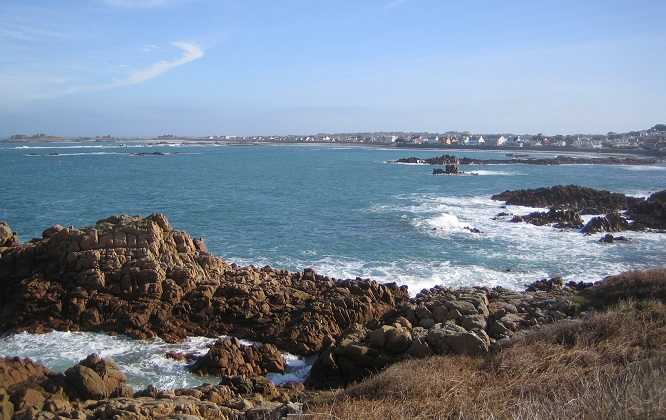 Guernsey is situated off the coast of Normandy and is the second largest of the Channel Islands. It is roughly 24 square miles in size and has a population of about 63,000. The largest town is St Peter Port (‘Town’) which has a variety of shops and a picturesque harbour. The Channel Islands were the only part of the UK to be successfully invaded and occupied during the Second World War.

We flew from London (Gatwick) to Guernsey (La Villiaze) on a smallish propeller driven plane. I’m not a great flyer and was terrified as we boarded but the cabin crew had clearly experienced the pleasure of coping with the ‘nervous passenger’ on more than one occasion.

Apparently the views as we approached the island were magnificent – I wouldn’t know as I was counting the stitching around the headrest of the seat in front. This proved a successful displacement activity to prevent a repeat of the anxiety-induced nausea I’d experienced at the airport.

Guernsey Airport is the complete antithesis of Gatwick, which made disembarking from the plane to leaving the airport, a smooth and painless experience. Unlike the trip back, when we waited at Gatwick to collect our luggage for longer than the duration of the actual flight.
There is a taxi rank as well as a bus stop just outside the airport building and not being familiar with our surroundings, we opted for a taxi. This was by far the best decision we could have made as our driver was a lovely lady who told us her father had been part of the resistance movement during the German occupation. She was able to tell us where to visit to make the most of our time on the island and she dropped us at our hotel in a matter of minutes.

An enduring memory of the holiday is sweeping round the bend in the road to Cobo Bay and seeing the coastline and our hotel – Cobo Bay Hotel, to the right, bathed in sunshine.

Once in our room, we were greeted by a lovely view, complimentary robes and slippers as well as a delicious bowl of fruit. There were a variety of beverages including fruit tea which, as a non-caffeine drinker, was a bonus.

Parking can be problematic and the hire cost far outweighs the public transport option, so we opted for the latter. Added to that, the views from the bus are spectacular and the company convivial; we didn’t undertake a single journey without chatting to a local resident or two. By the end of our stay, as it was low season with few tourists, we even got to know some of the drivers!

On our first full day, we wrapped up warm and ventured west from Cobo Bay along the coast, visiting Fort Hommet, Vazon Bay and Fort Richmond, towards Lihou Island.

We stopped to take in Fort Saumarez in Saint Peter (Saint Pierre du Bois), on the headland of L’Erée which extends to the Lihou causeway. This is a Martello Tower from the Napoleonic Wars, on top of which the German occupying forces built a four storey concrete observation tower. 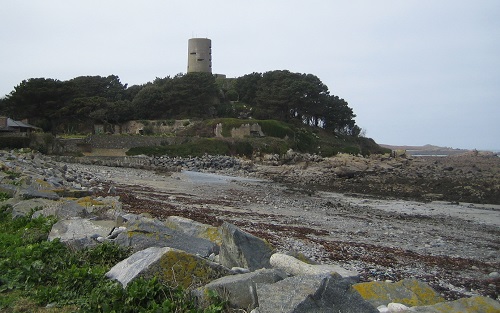 Tip: Check the tide times as the cobbled causeway is only accessible during low tide.

Tip: There are no public facilities on the island so be sure to take a bottle of water.

Whilst we were walking back from the island we came across this megalithic passage single chamber tomb overlooking Perelle Bay. The day by now, had turned decidedly chilly! We continued on to Rocquaine Bay then took an inland route to Saint Saviour and Castel. 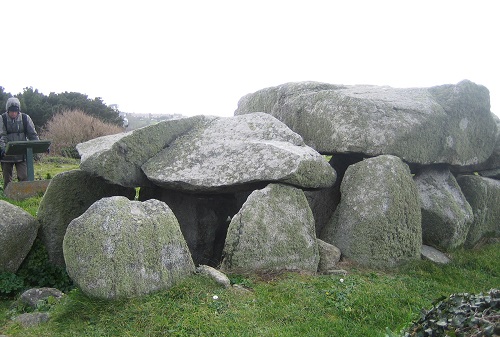 On the walk back to Cobo Bay we stumbled across a delightful small chapel in the village of Saint Saviour. Constructed in the 14th Century the chapel is still in regular use and has remained unaltered for over 600 years. The chapel is open to the public daily and we spent a very peaceful few minutes inside.

My favourite excursion was to the German Occupation Museum. We caught the bus just round the corner from our hotel and travelled via ‘Town’ to Les Houards, which was about four and a half miles away, as the crow flies. It was a bright but very cold day. We arrived shortly after the museum opened. For times, check the link – www.germanoccupationmuseum.co.uk

Resistance to the occupation was very limited in view of the high proportion of German troops to residents. However a few intrepid islanders set up a communication network, Guernsey Underground News (GUNS) produced on tomato packaging paper to keep the islanders abreast of the news that could be extrapolated via a few radios that had been successfully hidden away – The museum has a coffee shop and toilets.

There is little heating in the museum so in winter it is best to wear several layers. I spent at least five minutes with my hands wrapped around my steaming mug of coffee in order to thaw out! 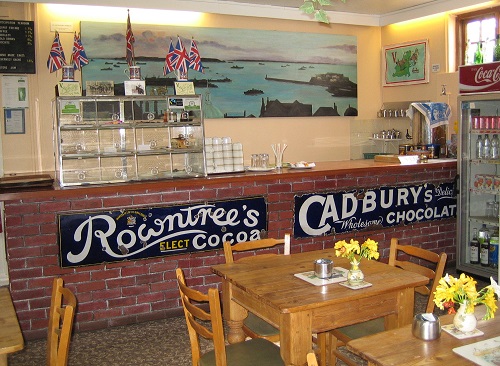 After we left the museum we walked along the southern coastal path for a couple of miles. Once we reached the road, we decided to wait at the next stop to get a bus back to ‘Town’ and then change for Cobo Bay. This was partly because in places, there are no pavements and the narrow twisty roads makes walking rather hazardous.

On a rather damp and dull day we decided to go into ‘Town’. We caught the bus and the journey took about twenty minutes. We visited the harbour, gardens and museum, as well as the art gallery. If you visit in the summer season, Castle Cornet looks like a great day out. (Open 31 March-29 October) – http://www.museums.gov.gg

Having successfully invaded the Channel Islands in 1940, the German Army set about fortifying the coastline to defend against what they believed would be a counter attack. On our last full day, we walked to Grande Havre, seeing gun emplacements and fortifications on the way. As it was, when the Allies launched their invasion they made straight for Normandy, ignoring the Channel Islands. I’m not sure when the German High Command realised their error but by the end of the war, only a few older or infirm soldiers were left to occupy the island, with their younger, able bodied colleagues being sent to the frontline.

This was our final morning; so thank you, Guernsey for a wonderful experience and hope to see you again soon!

Things do next time …

Four days certainly wasn’t long enough to see all of what Guernsey had to offer. Next time we plan to walk the coastal paths around Toureval on the south west. We would also like to visit Castle Cornet and Hautville House and then see what else we can discover.

If you enjoy walking, take a sturdy pair of boots and walking socks to prevent blisters.
A rucksack is essential for food, water, extra layers of clothing, a first aid kit, map and compass.
Tip: I wear my walking boots on the plane to save space and weight in the suitcase.

– The cost of all bus journeys on the island is fixed at £2 as of December 2016. It is also possible to purchase a variety of rover tickets from the kiosk at the bus depot or from any driver.
– The maximum speed for all vehicles is 25mph in built up areas and 35mph in rural areas.
– The majority of the place names are French.
– St Peter Port is always referred to as ‘Town’.
– Traffic must give way to vehicles approaching from junctions to the left.
– Whilst it is possible to use Sterling on the island, Guernsey currency needs to be exchanged in a bank on the mainland.
– If you are looking for nightlife, then I would recommend staying near or in St Peter Port as Cobo Bay is very quiet off season, although it is possible to get a taxi to Town.
– There are no street lights in Cobo Bay.