A Judgement in Stone by Ruth Rendell – Theatre Review

A Judgement in Stone by Ruth Rendell – Theatre Review by Julie 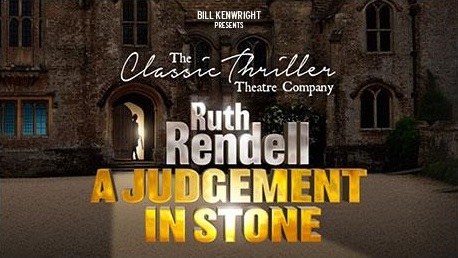 I recently visited Brighton on the Sussex coast, to see A Judgement in Stone a Bill Kenwright production at the Theatre Royal. Here is my very first play review! Enjoy – Julie

A Judgement in Stone

This was an adaptation of a Ruth Rendell book set in the late-1970’s. All the action takes place in one room of the country home of a successful businessman, George Coverdale, who is married to his second wife, Jacqueline. Other family members consist of Giles, Jacqueline’s teenage son from her first marriage and Melinda, George’s 23 year old daughter. They have some domestic help in the form of a cleaner, Eva Baalham and a gardener, Rodger Meadows both of whom live in the village.

They have need of a housekeeper and employ Eunice Parchman, a dowdy middle-aged lady with a seemingly quiet nature and few social skills. She strikes up an unlikely friendship with Joan Smith, a loud brash woman who runs the village shop and post office with her husband, Norman who gets a few mentions but is never seen.

The family are brutally murdered and the play opens with the doorbell ringing and Eunice letting in two police officers who have come to take another look at the murder scene, five weeks later. Asked why she was still living in the house, Eunice replied that no one had told her where else she should go.

The action moves between scenes with the police officers interviewing the staff after the crime had been committed and the dynamics in the house in the months leading up to the tragedy. 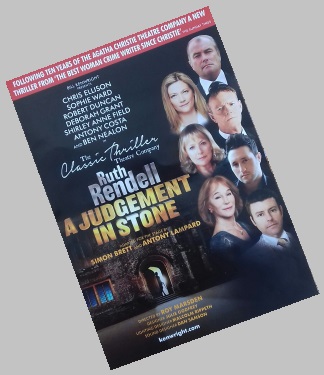 I liked the stage set and the lighting was effective. I wasn’t convinced by the clothes. The police officers’ suits were not cut in the iconic style of the 1970’s and with the exception of Joan who looked splendid, the female costumes didn’t create a feeling of the time. Whilst I wouldn’t expect Eunice or Eva to dress in the fashions of the day, neither Jacqueline nor Melinda managed a huge collar or mutton-sleeved dress between them.

I had no problems with scenes moving between the past and present. There were a couple of clear devices lest the audience should be in any doubt; firstly, the phone didn’t work after the crime had been committed and in the retrospective scenes it was used several times and secondly, Eunice helpfully wore a bright red coat for her interactions with the police officers.

For me, it wasn’t so much a who-dun-it; it was more of a why-did-they-do-it? The dynamics were played out as we watched the relationship between the Coverdale family and the housekeeper deteriorate, culminating in the dramatic murder scene and subsequent denouement.

Most of the acting was of a high standard. Chris Ellison was billed as Detective Superintendent Vetch but the part was played by an understudy. He had one small fumble near the beginning but otherwise did a good job. Sophie Ward’s Eunice was a strong character who won the sympathy of the audience in the early scenes, with one particularly poignant moment when we discover her secret. The family all acted their parts competently and there was a particularly solid performance from Ben Nealon as Detective Sergeant Challenor. Deborah Grant filled the stage as reformed sinner, Joan Smith which was entertaining to watch and I imagine, enormous fun to play.

I was disappointed in the casting of one cameo character who could have stolen the show but sadly seemed ill at ease in the role. Knowing how many great character actresses (or actor, if you prefer the term) are available to play such parts, it was a shame the production team opted for a well-known name who may well be absolutely fine in other roles but in my opinion, was not suited to this one.

Overall I quite enjoyed the play, there was a smattering of humour and undertones of menace when Eunice fell under the spell of Joan. It was certainly well received by a large and generous audience.

The pivotal twist relied on technology which might have been ground-breaking in 1970’s, but I’m not sure it really stood up to the test of time. Maybe I needed to successfully suspend my modern day mindset to have appreciated it fully. It was a nice trip to the theatre but the play itself didn’t wow me.