There was a story Jahir used to tell me. About how the first humans were born with wings. Can you imagine what that would be like? To fly anywhere in the world without worrying about having the right papers?

Mico has left his family, his home, his future. Setting out in search of a better life, he instead finds himself navigating one of the world’s most inhospitable environments the Jungle. For Mico, just one of many ‘unaccompanied children’, the Calais refugee camp has a wildness, a brutality all of its own.

A melting pot of characters, cultures, and stories, the Jungle often seems like its own strange world. But despite his ambitions to escape, Mico is unable to buy his way out from the ‘Ghost Men’ the dangerous men with magic who can cross borders unnoticed. Alone, desperate, and running out of options, the idea of jumping onto a speeding train to the UK begins to feel worryingly appealing.

But when Leila arrives at the camp one day, everything starts to change. Outspoken, gutsy, and fearless, she shows Mico that hope and friendship can grow in the most unusual places, and maybe, just maybe, they’ll show you the way out as well.

Teenagers Mico, Hassan and Sy all shared a tent at the notorious migrant camp dubbed ‘The Jungle’ in Calais, France. Mico, the main character, was told to leave his life behind, including his sister and mother, in search of a better one by his Uncle, after their home, and chicken farm was burnt down.

Mico didn’t expect to find himself trapped in ‘The Jungle’ with only the clothes on his back, constantly hungry, due to the little food available, and no money. He wanted to get to England, where, according to him, life would be good. There were only two ways of getting there though, jump on to the Euro star train, and face a certain death, or pay the ‘Ghost Men’ lots of money to be taken across the water.

Although he had Hassan, Sy and the oldest camp member, ‘The Doctor’, to keep him company something was missing. That was until feisty, boisterous Leila arrived in camp with her pregnant sister. Leila told Mico a story that her Brother-in-Law, Jahir used to tell her ‘The first humans were born with wings’. Asking Mico if he could imagine what that would be like? To fly anywhere in the world without worrying about having the right papers? This got Mico’s attention and made him more determined to get to England.

The two of them found themselves in lots of awkward, and sometimes dangerous, situations in their effort to find a way out of the camp, and into a better life.

‘The Jungle’ is the debut novel by Pooja Puri. It is beautifully written, and Mico and Leila were two very different characters, yet they shared a common goal, a better life. Whilst Mico wanted to find a better life, but didn’t really have the know how, or the guts, Leila was full of energy, vigour, and a strong determination to not sit back, she was going to find that better life for herself, one way or another.

The book showed the grim life of living in the camp, whilst at the same time painted a picture of how the refugee’s came together and helped one another. It did, however, make you realise that not everyone you know and care about can be trusted, and that some people would do anything in exchange for their own gain.

It also didn’t just show Mico and Leila as these two wonderful characters. They did some pretty horrible things. Whilst Ms. Puri defended their actions, if you were on the other side of the fence you could understand why the local residents were often scared of the refugees.

The book will have you escaping to a life that no-one would ever choose. It will have you rapidly turning the pages eager to find out whether Mico and Leila would ever make it out of the camp and into a better life.

Pooja Puri will be an author to look out for in the future if this book is anything to go by. I just wish the ending was different. After having read such a wonderful page turner, it really didn’t compliment the story.

With the launch of the book, author Pooja Puri and the publisher are also keen to promote a London-based charity called ‘The Bike Project‘. The charity take second-hand bikes, fix them up, and donate them to refugees and asylum seekers.

Pooja Puri is a graduate of King’s College London and is currently on the MA in Writing for Young People at Bath Spa University. In 2014, she was chosen as a winner of the Ideas Tap Writer’s Centre Norwich Inspires competition. 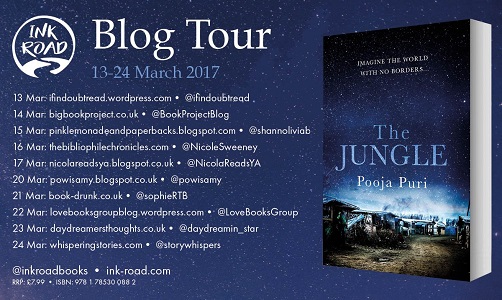