Today on the blog we welcome author Virginia Heath, with her guest post ‘From the King’s Men to the King’s Elite‘, as part of the publication day push for her latest book, ‘The Mysterious Lord Millcroft’, which was released today, 23rd August 2018.

Virginia Heath lives on the outskirts of London with her understanding husband and two, less understanding, teenagers. After spending years teaching history,she decided to follow her dream of writing for Harlequin.

Now she spends her days happily writing regency romances, creating heroes that she falls in love with and heroines who inspire her. When she isn’t doing that, Virginia likes to travel to far off places, shop for things that she doesn’t need or read romances written by other people.

For my new King’s Elite series, I had to do a great deal of research into smuggling. Something that was rife during the 18th and early 19th centuries for obvious reasons.  In order to raise money for numerous wars against the French or rebellious American colonies to name but two, the British government levied taxes on all manner of household goods from windows to salt.

In an economy where wages were painfully low, and a great majority of the population struggled to pay for food to put on the table, smuggled goods became a necessary evil and were largely untraceable once they entered the country. Shopkeepers and merchants happily sold smuggled goods and their customers were none the wiser. In fact, it is estimated that over three quarters of all the tea drunk in England and Scotland at the end of the 18th century came into the country illegally on smuggling vessels from the continent.

That meant that smuggling was a well-oiled operation, run by intelligent and savvy businessmen rather than course sailors and shady criminals we associate with it. The biggest challenge was evading the King’s Men- the nicknames for the Customs and Excise officials- who could seize cargoes, impound boats and transport those guilty of smuggling to Australia or hang them and display the bodies in gibbets as a warning to others.

In reality, the chance of capture was minimal. The King’s men were a ramshackle bunch who were largely based on land. As most smugglers entered our shores on manoeuvrable boats, it gave them a distinct advantage over the hapless excise men and their horses. This was a time when drunks and n’er-do-wells were still press-ganged into the king’s navy after inadvertently drinking a mug of ale with a shilling hidden at the bottom. Once they had ‘accepted’ the king’s shilling they were forced to go to sea, so had precious little expertise of sailing- or more specifically, sailing in difficult conditions. They were not match for the smugglers. That’s why I invented the King’s Elite- my crack team of Regency smuggler-catchers for my new series.

I married nicely with the King’s Men but set them apart as something special. The hero in The Mysterious Lord Millcroft, runs a branch within this known as the Invisibles because they are so good at blending into the background. Except in this book, he doesn’t, but I digress…

To make my story authentic, I had to make sure my Regency spies were dealing with the smugglers in authentic Regency situations.  Smuggling vessels usually landed by night and preferred to operate during bad weather when there was even less chance of being caught- hence there is a scene in The Mysterious Lord Millcroft where the hero and heroine find themselves watching the smugglers from a clifftop in the middle of a violent thunderstorm.

Smuggling vessels were often painted black, with black sails, so that they were almost impossible to see in the dark. They did not have a specific landing place worked out in advance, merely a rough area of coast to head towards, and relied on conspirators on shore to guide them to a safe place. This was usually done by shining a light at the boat for it to follow.  You need to bear in mind that street lighting was a new-fangled, modern and expensive invention at this time. The villages that peppered the coast would have been plunged into complete darkness the moment the sun went down. One solitary lantern would stick out like a sore thumb in this gloomy landscape and would easily be enough to guide the ships safely to the shore on the spot where the waiting carts would carry the cargo away to safety.

Unfortunately, one lantern on a pitch black stretch of beach would also alert the excise men as well. Therefore, the smugglers and those that helped them had to be resourceful. Instead of a constant light, the smugglers resorted to using a flash to let the boats know that the coast was clear. This could be achieved by striking a match or creating a spark from a tinderbox. A brighter signal could be achieved by using an old flintlock pistol. Those old guns relied on a gunpowder to fire the bullet. The powder would be placed in the pan and lit. The clever smugglers modified some of their pistols, removing the top chamber of the gun, so that when the powder was lit the subsequent explosion burned brightly for a split second- like a firework. This flash in the pan would be over almost as soon as it started but would be bright enough for the boats looking for it to see clearly from many miles away.

Once the boats came in to the shore, teams of people would be needed to quickly transport the illegal cargoes over the beaches or up cliffs inland to be hidden, and later distributed.  Making the individuals who ran these large-scale smuggling operations very, very rich and very, very cutthroat. Something that gave me an intriguing idea… 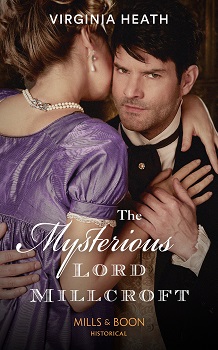 Life as a duchess…

Or something much more dangerous…?

Part of The King’s Elite. Constantly told her beauty and charm is all she has to offer, Lady Clarissa is intent on marrying a duke. And intriguing spy Sebastian Leatham will help her!

Only first she’ll assist him with his new assignment—playing the part of confident aristocrat Lord Millcroft. Sebastian awakens a burning desire within Clarissa which leaves her questioning whether becoming a duchess is what she truly longs for…

You can find out more about Virginia Heath by visiting the website/social media sites below.