‘I’ve googled it, how to die,’ Jenny says to Maureen. ‘It was full of climbing this mountain, swimming that sea, becoming a marathon runner and raising millions for charity.’

‘Sounds like bloody hard work. You can make it more fun than that surely?’

Frankly, her life was tough enough already. Two tricky teenagers, her mother’s constant complaints, friends who aren’t up to the job and a career which has been spiralling downwards since she won ‘Sunseeker Tour Rep of the Season’ twenty years ago.

And now this: a cheating husband and a death sentence.

Enough is enough. Jenny vows to keep both catastrophes a secret. She takes her life – and death – into her own hands and decides to live as she did when she was happiest… in 1996. She plans a spectacular 1990s themed party in place of a wake that she herself will attend. But will she be able to keep her secrets for long enough to have the party of a lifetime?

Jenny had just been given the devastating news that she had terminal cancer, and most likely looking at 18 months to 2 years left to live. Having been to the hospital appointment on her own, she decided she needed to talk to her husband and went to visit him at work, where he was working late. Unfortunately, it wasn’t paperwork he was dealing with, although there was a filing cabinet involved, but some leggy blonde woman.

After leaving the office building, unnoticed, realisation set in, she was really dying and her husband was really cheating. Determined to be herself for as long as possible, she decided to forgo chemotherapy and put off telling her family, confiding in only one person, a women at the care home she works at, Maureen. Well, who else could she of opened up to? Cheating hubby, anxious 15 year old son, moody 17 year old daughter, mother who has always seen the worst in her, a brother who was never around, or her dad that had dementia, and this isn’t including ‘friends’ that are so far up their own arses.

She might not of been able to stop the cancer from eventually taking her life, but she could have the best 18 (ish) months that she could have, starting with turning the clocks back to 1996.

Since the death of my dad from cancer in 2016, I’ve avoided books that deal mainly with subjects like this one, terminal cancer and death. However, I’ve been reading Tracy Bloom’s books for many years, so I knew what the writing was going to be like. I also knew that she would take a difficult subject to talk about and make it into something positive and enjoyable, I wasn’t wrong.

The plot is a humorous take on one woman coming to terms with her cancer prognosis and deciding to take matters into her own hands. She has nothing left to lose anymore, so with a new haircut, adventurous clothes, a slim body (though not intentional), and a no holds barred attitude, Jenny has returned to how she was when she felt like the happiest woman alive. She doesn’t want people’s sympathy, or their tears. This is her death and she is going to go about it, however the hell she wants to.

I liked Jenny from the beginning. Some people might not understand her attitude of wanting to go to a medical appointment alone, or not telling her family of her diagnosis, but I could understand her perfectly. What I saw was a woman trying to protect those she loved, plus she didn’t have to deal with people looking at her sympathetically or trying to wrap her in cotton wool, she just wanted to be herself for as long as she could. She only chose to tell elderly Maureen as she knew that she wouldn’t sugar coat anything, nor go all soppy on her.

Ms. Bloom has managed to take a hard to deal with subject and whilst keeping the seriousness of it, has written a plot that you can laugh along with. Yes, there are a few ‘gulp’ moments, but for the vast majority of the book I had a smile on my face.

This is a beautiful book that has been exquisitely crafted and one that I thoroughly enjoyed reading.

I started writing when my cruel, heartless husband ripped me away from my dream job, shopping for rollercoasters for the UK’s leading theme parks, to live in America with a brand new baby and no mates.

In a cunning plan to avoid domestic duties and people who didn’t understand my Derbyshire accent, I wrote NO-ONE EVER HAS SEX ON A TUESDAY. It went on to be successfully published internationally and became an ebook Number 1 Best Seller in the UK in 2013 before being named Best Author Published Read at the Festival of Romance. 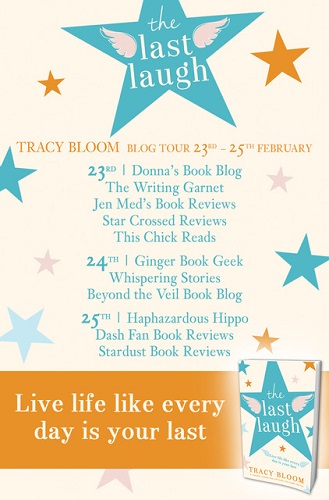