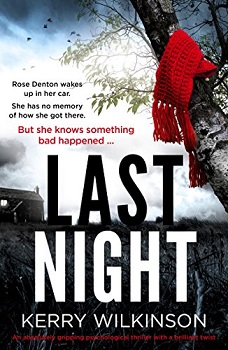 In the early hours of the morning, Rose awakens to find herself sat behind the wheel of her car. She quickly realises that she is in a field and that there is a hole in the hedge by the road. Obviously she has come off the road and ended up here. The only thing is, she doesn’t even remember getting in her car, let alone driving.

Upon getting out of the car she discovers that there is also blood on her bonnet, lots of blood, yet no damage and no evidence of anything, or anyone being hit. She is completely baffled.

She decides that she needs to get home, so drives out of the field and the 30 miles back. Once home she finds out that her daughters boyfriend, who she doesn’t like, is missing and that she was supposed to be staying at a hotel overnight and that one of the staff members has been reported missing too.

Is Rose losing it, has she hurt someone, or is someone playing games with her?

This is the first book that I have read by Kerry Wilkinson, and what a book it is. Diving straight into the story, the book opens with Rose in the field in her car. Just like you or I most likely would, Rose’s first thoughts are whether she is dreaming, but then soon realises that everything is too realistic.

Her life is a mess. She is having marital problems, is at logger-heads with her teenage daughter, her IT career isn’t going well and now a blast from the past has turned up again, someone she was hoping to never see again.

I liked Rose, she was desperate to find out what happened before she ended up in the field, but unwilling to share information with anyone as she wasn’t convinced that someone was playing games with her. As a reader you are kept guessing as to whether it is just Rose being forgetful, or is there some other person pulling her strings and if so, which one and why?

I found the whole plot addictive and was desperate to know what had really happened. The book delved into Rose’s past as well as the present, which gave little hints as to what could really be going on.

When we finally get to discover what happened to Rose I was a totally surprised. I like a book that surprises me and this once certainly did that with its added twists. The ending also left a few hints to a follow-on book, I can’t wait to read it if there is one.

Kerry Wilkinson has had No.1 bestsellers in the UK, Canada, South Africa and Singapore, as well as top-five books in Australia. He has also written two top-20 thrillers in the United States.

As well as his million-selling Jessica Daniel series, Kerry has written the Silver Blackthorn trilogy – a fantasy-adventure serial for young adults – a second crime series featuring private investigator Andrew Hunter, plus numerous standalone novels. He has been published around the world in more than a dozen languages.

Originally from the county of Somerset, Kerry has spent far too long living in the north of England, picking up words like ‘barm’ and ‘ginnel’.

When he’s short of ideas, he rides his bike or bakes cakes. When he’s not, he writes it all down. 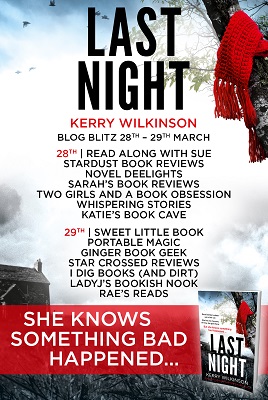