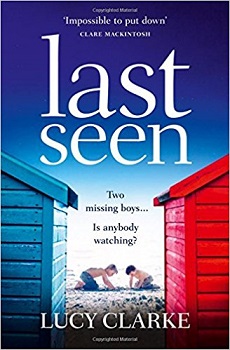 Seven years ago, two boys went missing at sea – and only one was brought to shore. The Sandbank, a remote stretch of coast dotted with beach huts, was scarred forever.

Sarah’s son survived, but on the anniversary of the accident, he disappears without trace. As new secrets begin to surface, The Sandbank hums with tension and unanswered questions. Sarah’s search grows more desperate and she starts to mistrust everyone she knows – and she’s right to.

Someone saw everything on that fateful day seven years ago. And they’ll do anything to keep the truth buried.

Sarah and Isla were best friends, they grew up together and always dreamed of owning beach huts next to one another. They did everything together, even having their sons in the same year.

Seven years ago tragedy struck when Jacob, Sarah’s son, and Marley, Isla son, were ten years old. The two went swimming, but only one of them returned.

Now on the anniversary of Marley’s death, Jacob has gone missing. Sarah is trying to stay strong and positive, but something isn’t right, and someone knows where her son is, but who is that person?

Last Seen is a psychological thriller. It starts off with the drowning of Marley, (though you don’t know this at the time). Once we get into the main story it begins quite slowly, and I must admit I almost gave up. I found Sarah boring and rather old headed for her age.

Then the book reached a turning point, the pace quickened and the intense plot took over. The cast and situation are very believable, plus with the very descriptive scenery, it felt like I could of been reading a news article about a real event.

It is written from two viewpoints, Sarah and Isla’s, both past and present. I’m not a great lover of multiple viewpoint books, especially when I personally feel that the story would of worked just as well being written in the third person, but I stuck with it, and did enjoy it.

There are a lot of twists, and just when you think you might have the answer, Ms. Clarke throws in a curve ball, and you are back to square one. Everyone was a suspect, and I found it hard to decipher who was telling the truth, and who had something to hide.

I was gripped to the pages with the need to know where Jacob was, and what had happened to him. The book is quite dark in places, and it certainly kept me guessing right up until the end.

One moment in time shattered the lives of the two best friends, a friendship that never managed to repair itself. Something lurking in the past was holding the key to the present, but what did happen on that fateful night seven years ago, and how was it connected to the present?

Lucy graduated from university with a first class degree in English Literature, but it wasn’t until she was on a six month road trip across the US and Canada, that she decided she’d love to be a novelist.

Many twists and turns later, Lucy’s debut novel, The Sea Sisters, was published (HarperCollins, 2013). It was a Richard & Judy Book Club choice, and has been published in over ten countries.

Lucy is married to a professional windsurfer, and together with their young children they spend their winters travelling, and their summers at home on the south coast of England. Lucy writes from a beach hut.