‘An exceeding pleasant town, enriched with a beautiful cathedral and surrounded by fresh-looking country.’ Reflected Romantic poet John Keats on Winchester in 1819. He had a point. A beautiful city with rich history and deep charm, it has long been a city of words, as guide Vanessa showed us on a spring day in March, as we explored this loveliest of cities.

It was actually Winchester that inspired his famous Ode To Autumn. It’s noted that enjoyed a daily walk though the Cathedral Close, along ‘most beautifully clear’ River Itchen to the Hospital of St Cross. Founded in 1136, it is country’s oldest charitable institution and still functions as an almshouse. In another nod to writing, it was recently featured in the BBC’s adaptation of Wolf Hall. 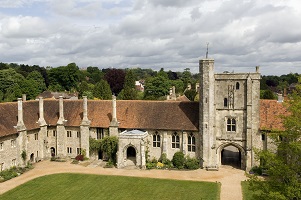 Thomas Hardy rarely gushes with positivity, but he did have warm feelings towards Winchester. In Tess of the D’Ubervilles he writes of ‘that fine old city.’ As Tess, Clare and Angel ascent the high street to the top of West Hill, they see far, wide, and beautiful. ‘The prospect from this summit was almost unlimited. In the valley beneath lay the city they had just left, its more prominent buildings showing as in an isometric drawing—among them the broad cathedral tower, with its Norman windows and immense length of aisle and nave, the spires of St Thomas’s, the pinnacled tower of the College, and, more to the right, the tower and gables of the ancient hospice, where to this day the pilgrim may receive his dole of bread and ale. Behind the city swept the rotund upland of St Catherine’s Hill; further off, landscape beyond landscape, till the horizon was lost in the radiance of the sun hanging above it.‘ A blue plaque is dedicated to Hardy on the wall of St Thomas’s Church.

The Cathedral is indeed beautiful. There has always been a link between religion and literacy, with monks often being some of the few to be educated. The Winchester Bible is on display in the Cathedral, its bright colours and bold illustrations still gleaming. It is reported that one single scribe wrote out the entire bible in the Latin of St Jerome, after being commissioned by commissioned in 1160, probably by Henry of Blois, grandson of William the Conqueror and Bishop of Winchester for over 40 years. At the beginning of each book are vibrant initials, drawn and coloured by a team of artists over a period of twenty years.

It is in the Cathedral that Jane Austen was buried in 1817. Despite her acclaim today, she did not die a lady of fame and fortune, although at least acknowledged and respected in some circles. In fact, her tombstone does not even mention her writing, although does praise the usual qualities of a woman at the time – sweetness, faith, devotion and patience. Realising the omission, a brass plaque was added in 1872 and a stained glass window in 1900, acknowledging her contribution to literature. The words come from her nephew, Edward, and reads ‘known to many by her writings, endeared to her family by the varied charms of her character and ennobled by her Christian faith and piety.‘

Having lived most of her life in Steventon, with periods in Bath and Southampton, the final eight years of Jane’s life were spent in Chawton, there is a museum and library dedicated to her. She died at the age of 41 after a long illness (likely tuberculosis and cancer) at nearby 8 Cottage Road, now a private residency.

Two hundred years after her death, the city and country are celebrated Jane Austen’s life and legacy. Winchester seems like a great place to start exploring her words, and that of so many others.

I would like to say thank you to Francesca Baker for sharing with us details of her day on a guided literary walking tour of Winchester.