I received free copy of this book

On a beautifully restored barge on the Seine, Jean Perdu runs a bookshop; or rather a ‘literary apothecary’, for this bookseller possesses a rare gift for sensing which books will soothe the troubled souls of his customers.

The only person he is unable to cure, it seems, is himself. He has nursed a broken heart ever since the night, twenty-one years ago, when the love of his life fled Paris, leaving behind a handwritten letter that he has never dared read.

His memories and his love have been gathering dust – until now. The arrival of an enigmatic new neighbour in his eccentric apartment building on Rue Montagnard inspires Jean to unlock his heart, unmoor the floating bookshop and set off for Provence, in search of the past and his beloved. 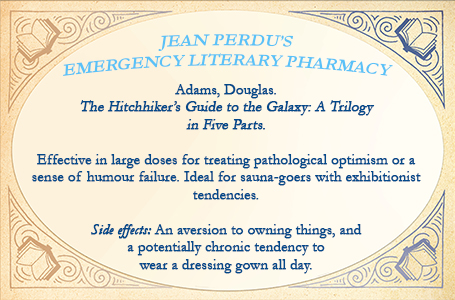 Monsieur Perdu has been grieving for the love of his life, Manon, for 21 years since she left him out of the blue. He has shut himself into his own little world and won’t let anyone get close to him.

He runs a bookshop on a barge on the river Seine in Paris called the "Literacy Apothecary". He has a special gift of being able to read people and help them choose the right book for them emotionally at the stage of their life they are at, at that moment.

In the apartments where Perdu lives, a new occupant has moved in, Catherine. She has split from her cheating husband and has arrived with nothing to her name including furniture. Perdu offers her an old desk which he has not used since the day Manon left. It has been hidden in a room that Perdu hasn’t stepped foot in for 21 years and is closed off from the rest of the apartment by a wall of books. In the desk Catherine finds a letter from Manon and makes Perdu open it. The letter contains the reason why Manon left. Perdu is devastated by the news and angry at himself for not opening the letter sooner, in a rage he storms off to the book barge.

He decides he needs to go to Manon and so sets sail. As he casts off, another of the apartments occupants Max Jordon, an author, jumps on to the barge and asks Perdu if he can travel with him. Max has lost his ability to write and his imagination has dried up, feeling that travelling with Perdu will help him create his next masterpiece. Together, the two of them sail south. They stop off on their travels at many different locations and meet plenty of others who are making a journey of their own for various reasons. The book follows Perdu on his quest to release the pain he has been holding onto for so long and to live again in the present.

The story is truly romantic, we feel Perdu’s love for Manon throughout the book, a love which he still has 21 years after he last saw her. With Nina’s creative writing we are able to sense all of Perdu’s emotions, not only his love but his sadness and how much he is hurting as well. Parts of the book will definitely pull at your heart strings and bring a tear to your heart.

I was absorbed from the beginning not only into Perdu’s world but Max’s as well. Perdu is a lovely charismatic man, who has been hiding himself away, not letting himself get close to anyone over the years, as his emotions are still raw from the unexplained departure of his true love. Max is a young man, who has been thrown into the lime light, when his début novel becomes a best seller. He is approached where ever he goes and is struggling to write a second book, something everyone keeps on asking him about.

I loved the vivid descriptions of the scenery, which are finely tuned so that you get a real sense of the cities where they moor their floating bookshop.

The book is very thought-provoking, and Nina’s use of vocabulary had me reaching for the dictionary on more than one occasion.

At first I found it quite hard to get into and admit there were sections that I scooted through, not finding them really relevant to the story but I carried on and found the more I read on, the more I enjoyed the book, becoming totally engrossed in the story and finding it hard to put down.

The Little Paris Bookshop is masterful, memorable and it was a delight to read.

Born 1973 in Bielefeld, Germany, Nina George is a prize-winning and bestselling author (“Das Lavendelzimmer” – “The Little Paris Bookshop”) and freelance journalist since 1992, who has published 26 books (novels, mysteries and non-fiction) as well as over hundred short stories and more than 600 columns. George has worked as a cop reporter, columnist and managing editor for a wide range of publications, including Hamburger Abendblatt, Die Welt, Der Hamburger, “politik und kultur” as well as TV Movie and Federwelt. Georges writes also under three pen-names, for ex “Jean Bagnol”, a double-andronym for provence-based mystery novels.

Nina George sits on the board of the Three Seas Writers’ and Translaters’ Council (TSWTC), whose members come from 16 different countries. In May 2015 she was elected to the board of German PEN, and is now official adviser for the topic author’s rights. George is also on the administrative board of Collecting Society VG Wort.

Nina George teaches writing and coaches young people, adults and professional authors, and also moderates (bilingual) readings (German-English), and works as a speaker on author’s rights and transfer of value in the digital world.