Lost Along the Way by Erin Duffy – Blog Tour

Lost Along the Way by Erin Duffy – Blog Tour including Excerpt 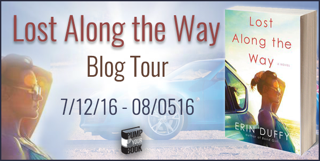 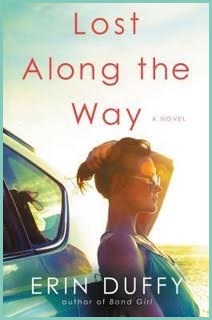 All through childhood and adolescence, Jane, Cara, and Meg swore their friendship would stand the test of time. Nothing would come between them, they pledged. But once they hit their twenties, life got more complicated and the BFFs began to grow distant. When Jane eloped with her slick, wealthy new boyfriend and didn’t invite her oldest friends to the ceremony, the small cracks and fissures in their once rock-solid relationship became a chasm that tore them apart.

Ten years later, when her husband is arrested and publically shamed for defrauding his clients, Jane realizes her life among the one percent was a sham. Penniless and desperate, deserted by the high-society crowd who turn their surgically perfected noses up at her, she comes crawling back to her childhood friends seeking forgiveness. But Cara and Meg have troubles of their own. One of them is trapped in a bad marriage with an abusive husband, while the other can’t have the one thing she desperately wants: a baby. Yet as much as they’d love to see Jane get her long overdue comeuppance, Cara and Meg won’t abandon their old friend in her time of need.

The story of three friends who find themselves on a laugh-out-loud life adventure, Lost Along the Wayilluminates the moments that make us, the betrayals that break us, and the power of love that helps us forgive even the most painful hurts.

“The feds are going to be here soon, and when they’re done with me, the new boobs I gave you for your birthday will be the only things we have left. I’m not entirely sure they won’t try to repossess them, too. They’re going to take everything.”
Jane instinctively grabbed her chest. The implants had not been a present she’d wanted, but somehow she’d let Doug talk her into getting them, probably because they came with a trip to the Bahamas and a ton of new swimwear. Fine, it wasn’t a traditional birthday present, but most of the women she socialized with had their boobs done, so she didn’t feel like she needed to be ashamed of them.
“Are you understanding what I’m telling you? Jane, it was a scam. All of it. I’m a fraud.”
Jane’s mind refused to absorb what Doug was saying because it was too busy soaking up her surroundings: Christmas cards embossed with gold foil awaiting their angel-wing stamps, tree branches bending under the weight of glittering ornaments and champagne-colored lights, Tiffany lamps artfully displayed on antique tables next to crystal candy dishes and sterling silver frames. She tried to memorize all of it, every relic of her privileged life, knowing that while they were sitting tangibly in front of her they were simultaneously disappearing into the mist.
“Call Gavin and ask him to loan you some money. I don’t know how much longer you’ll have access to anything,” Doug said softly. “You’ll need it.”
“You want me to ask my little brother for money? Are you insane?” Gavin worked for an Internet company out in Silicon Valley and did very well for himself. Borrowing money from him wasn’t the issue. The issue was that Doug had somehow managed to destroy himself, and apparently her because she’d blindly gone along for the ride.
“I’m sorry, Jane. I’m so sorry.” With that, he sank down on the floor and began to cry. Jane didn’t go to him. She didn’t offer comfort or sympathy or empathy. The loyal-wife part of her thought about it briefly, but the fantastically angry part of her told her to stay where she was. If what he was saying was true, he didn’t deserve to be comforted by her or anyone else. If what he was saying was true, her entire life was a lie. The air felt like it was slowly being sucked from the room. Her lungs began to burn and threatened to explode.
“Start at the beginning,” she whispered. “What have you done to us?”
He refused to look at her.
Before he had a chance to explain anything, the FBI knocked on the door. In less than sixty seconds, Doug was cuffed and escorted out of the apartment, leaving her alone in her living room longing for the now distant time when her biggest problems were unpolished silver and crab cakes.

From Lost Along the Way by Erin Duffy. Copyright 2016 by Erin Duffy. Reprinted by permission of William Morrow, an imprint of HarperCollins Publishers.

Erin Duffy graduated from Georgetown University in 2000 with a B.A. in English and worked on Wall Street, a career that inspired her first novel, BOND GIRL. She lives in New York with her husband and children.