Lou Out of Luck by Nat Luurtsema – Book Review

Lou Out of Luck by Nat Luurtsema – Book Review 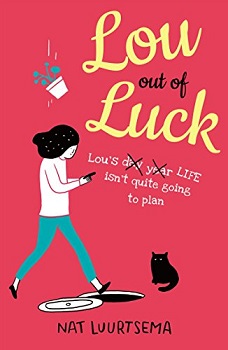 Lou Out of Luck

Poverty sucks. Dad’s timing the family’s showers and refusing to turn on the heating. Mum has arranged for Lou to get lifts to school with Drippy Dermot and his eccentric mother in the Van of Doom. And lentils seem to feature in EVERY SINGLE MEAL.

Lou is still coming down from her brief moment of TV super-stardom and getting to grips with the fact that – hold the news – SHE HAS A BOYFRIEND, but with both parents out of work, life isn’t all plain sailing. Throw in Hannah’s obsession with the school prom, Dad’s strange shed activity and Lav’s brief flirtation with a modelling career, and suddenly training a dance troupe to swim underwater seems like a walk in the park.

In this book, Louise Brown (Lou) is not quite so uncool as she was in the first and she is still with her boyfriend Gabe, who she got together with at the end of the first book.

Lou’s family are going through a bit of a crisis. After her mum and dad finally got back together, her mum was then made redundant and with her dad still out of work it now means that money is really tight, so her dad is only allowing them four-minute showers and they are eating supermarket own brand food.

To also save money the family car is being used as little as possible so Lou is now having to get a lift back and forth to school with the most uncool kid in school Dermot, in his mums unhealthy sounding van that can’t even be stopped or it won’t start again, so they have to jump in and out whilst it is still moving.

There is also a school prom on the horizon and best friend Hannah has been succumbed to help with the planning by the three stuck-up students, Cammie, Melia, and Nicola.

As well as the above her sister Lavender has been entered into a modelling competition without her permission but it turns out the prize for coming first is £25,000 and the family could do with the money, so her dad wants her to stick with it.

This second book in the series is just as hilarious as the first and the plot is packed full with great scenes. It is easily addictive and was so much fun to read. Young adults will be able to relate to Lou’s worries and share her embarrassments too (especially her dad’s new job!).

The story has a completely uplifting effect on you as you read and helps you to see the funny side of life as a teenager and parent of one too.

Nat Luurtsema is a very skilled author and I hope she continues to write more books in this series as they are worth every penny. I don’t care how old you are this series is worth a read.

I was born and raised in Watford. I was a quiet bookworm, blessed with a thick fringe, even thicker glasses and a growth spurt that threatened to never stop. I studied English at Oxford, and I always wrote in private until I was twenty five, when I did my first stand-up gig and my life changed so fast. It become normal to gig to a thousand people, sleep in my car at Leigh Delamere services, live off crisps and have NO idea how to pay my rent.

I like to work on the bus – I’ll often sit on the top deck and ride a scenic bus in a circle a few times, to listen to people chat and magpie their interesting bits. Unless it’s raining and then I’ll write in bed and slowly fill it with toast crumbs.