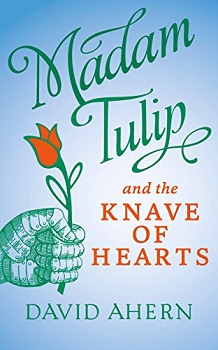 When out-of-work actress Derry O’Donnell moonlights as celebrity fortune-teller Madam Tulip in an English Stately home, she’s trying to make some cash. Instead, she is drawn into an alien world of wealth, titled privilege and family secrets.

A countess once a chorus girl, a gambling earl and his daughters, a cultured and handsome art expert–all caught in a terrifying web of ghastly threats, murder and abduction. As an aristocratic engagement party turns into a nightmare, Derry and her friend Bruce face the prospect of a gruesome and infamous death.

It’s a delight to again meet up with Madam Tulip aka Derry, Jacko and Bruce, in David Ahern’s very amusing new release, Madam Tulip and the Knave of Hearts. And, even better, this second book is far more of a whodunit with a real mystery to be solved and a supporting cast of characters who are anything but open and truthful. The setting too is that classic of good old-fashioned mysteries: a stately home in England.

I only balked near the end, when goodies and baddies finally confronted each other. Yes, it has become standard that such confrontations are violent, but Ahern throws it at us full force with unbelievable made-for-television torture, violence, crashes and flames. Even more difficult, there are three entire chapters of the stuff before the story resumes and trots on to its satisfactory finish.

The Knave of Hearts is, nonetheless, a good read, never dull, never serious either, and always diverting.

David Ahern grew up in a theatrical family in Ireland but ran away to Scotland to become a research psychologist and sensible person. He earned his doctorate and taught in major Universities but could never explain to his granny why he didn’t own a stethoscope.

Finding the challenge of pretending to know things exhausting, David Ahern shaved off his beard and absconded once more, this time to work in television. He became a writer, director and producer, creating international documentary series. He won numerous awards but found nobody was much impressed.

For want of a better plan, David Ahern took to writing fiction. Madame Tulip isn’t his first novel, but writing it was the most fun he’s ever had with a computer. He is now writing the third in the series and enjoys pretending that this activity is actual work.