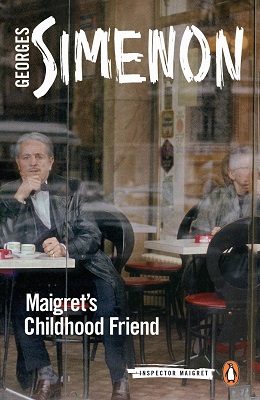 A visit from a long-lost schoolmate who has fallen on hard times forces Maigret to unpick a seedy tangle of love affairs in Montmartre, and to confront the tragedy of a wasted life.

This novel has been published in a previous translation as Maigret’s Boyhood Friend.

Georges Simenon was a prolific writer with hundreds of published works comprising novels, short stories, articles and a great deal of “pulp” fiction, much of which was published in low priced magazines. It is said that he regularly produced 60-80 pages per day. Maigret was his most successful character with 75 novels and 28 short stories published between 1930 and 1972.

Maigret’s Childhood Friend was published in 1968 by which time Simenon was well settled into the character so there is no surprise that the book is easy to read. Indeed, it is short enough and compelling enough to read in a single day.

An earlier translation of this book was published as Maigret’s Boyhood Friend but my O-level French suggests that the new English title is more accurate. My paperback copy bears an image of Maigret viewed through a café window, clearly contemplating a problem.

Although I cannot comment on the technicality of the translation of the book, Shaun Whiteside has perfectly captured the well-known images of Maigret and the atmosphere of mid-century Paris is so strong that I swear I could smell stale smoke from Disc Bleu or Gitanes on every page. Incidentally, Simenon was not raised in Paris and was not even born in France but his training as a Parisian newspaper reporter taught him the activity of every backstreet of that city.

As one would expect the story revolves around a mysterious murder and a selection of colourful suspects. During his investigation Maigret gets to visit a variety of businesses, bars and bistros, generally in the seedier parts of Paris. The investigation stalls somewhat until a flash of inspiration enables him to solve the case.

Although the case was intriguing the denouement left me a little flat. I had not been able to solve it myself but when Maigret revealed the truth I was not blown away.

But why should a couple of dull pages spoil the great fun that I gained from the preceding 174. I found the whole package all so entertaining and all so comforting that I have to award it four stars.

Georges Simenon is one of the most addictive and bestselling European authors of the 20th Century. His work consists of 391 titles, and he is best known as the creator of the fictional detective series consisting of 75 books featuring Inspector Maigret, translated into more than 50 languages and sold in more than 50 countries.