A Manor in Cornwall by Laura Briggs – Release Day Post

A Manor in Cornwall by Laura Briggs – Release Day Post 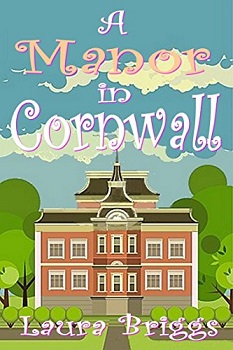 Now that Julianne’s happily ending is secure, her career as Cliffs House’s event planner is suddenly busier than ever. Thanks to a Cornish singing sensation’s upcoming concert at Cliffs House, and her promise to plan the perfect wedding for Pippa, Julianne hasn’t a moment to spare for Matthew or his plans for a weekend outing at Pencarrow. But she’s determined to find a way without letting down Ceffylgwyn for its big moment, or disappointing Pippa on the biggest day of her friend’s life.

With a starstruck crew of volunteers, a persistent American event planner, and a seemingly ill-chosen assistant in the form of the village’s former troublemaker, Julianne has her hands full, as usual. And it will take all of her friends, a few surprise twists, and — of course — her beloved Matthew to see her through it.

“As you all know, we have less than a month until Wendy Alistair’s gala evening, and we have a tremendous amount of work left to do,” said Lord William. “I know we’re feeling the pressure, but we need our very best to be on display for the event.”

This morning’s staff meeting was in his office, where we sat in a circle — me, Lady Amanda, Geoff the estate’s manager, Dinah, and the new gardener Pollock. Lord William had evidently been busy on the estate’s property shortly beforehand; little chips and shavings of wood were caught in the yarn of his pullover, and a pair of work gloves were sticking out of his pocket.

“It’s not too soon to start mobilising the event staff, is it?” I asked. As always, Cliffs House would hire several locals — usually young and eager for extra wages — to help out with catering, cleaning, and anything else that was overwhelming the manor’s modest full-time staff.

“The more the merrier,” answered Lord William. “Ms. Alistair’s people have been kind enough to supply their completed vision of her performance, and some of the details might be slightly daunting.”

Wendy Alistair’s name was on everyone’s lips in Ceffylgwyn lately, and probably all over the county, for that matter. It wasn’t every day that a Cornish singer became the leading soprano in a major opera company in Milan — or became an overnight singing sensation after an inspired public performance for the royal family. Wendy Alistair, former mezzo-soprano in Milan, had now recorded a project that was already number one on the U.K. classical charts even before its release.

“I still can’t believe she’s coming here,” said Dinah. “I mean, we’ve had celebrities before — but never one this famous. Her poster’s everywhere when you go into the village.”