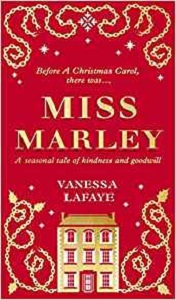 Orphans Clara and Jacob Marley live by their wits, scavenging for scraps in the poorest alleyways of London, in the shadow of the workhouse. Every night, Jake promises his little sister ‘tomorrow will be better’ and when the chance to escape poverty comes their way, he seizes it despite the terrible price.

And so Jacob Marley is set on a path that leads to his infamous partnership with Ebenezer Scrooge. As Jacob builds a fortress of wealth to keep the world out, only Clara can warn him of the hideous fate that awaits him if he refuses to let love and kindness into his heart…

When I was contacted and asked if I would be interested in reading ‘Miss Marley’ I was a little apprehensive at saying yes. You see the author Vanessa Lafaye died whilst in the midst of writing this book and her good friend Rebecca Mascull completed it for her.

I was unsure how I would feel about critiquing the book, or whether I would be able to notice the difference in writing style and where Rebecca took over. Would the writing or plot alter?

I decided to put my big girls pants on and agreed to review it. I mean who could pass up the opportunity to get a new backstory to an old classic. I need not of worried though, the book is just perfect and had I not of known where Vanessa got up to and Rebecca took over from, I wouldn’t have known this was written by two authors.

At just 112 pages, this is a beautiful novella telling Vanessa’s well thought out backstory to why Jacob Marley (Charles Dickens, A Christmas Carol) came to be wandering the spirit world and haunting Ebeneezer Scrooge.

The book is split into three parts and begins with Clara Belle Marley (a sister to Jacob that Vanessa has invented) and Jacob himself trying to fend for themselves out on the cold, dirty streets of Victorian London. The children once lived in a beautiful house with their parents, but unfortunately were turfed out by their wicked Uncle, when their parents died.

From here we witness the two getting back on their feet and to Jacob’s money lending business and how he became to be a Bah Humbug and subsequently a ghost.

The book is just amazing. This new world that Vanessa has created to an old classic is not only extremely imaginative it also fits in perfectly with the original story and I’m sure Mr. Dickens would have been very proud.

The pace is just right, the characters are adorable, especially Clara, and the whole book was delightful to read. This is not only a book that looks beautiful on the outside, but it is also as beautiful on the inside and I truly adored every minute of it. So much so, I read it in one sitting.

This is a book that would make the perfect gift for any Dickens fan and the most glorious read for the festive season.

Vanessa LaFaye was an American born author living in England. A thirst for adventure brought her to Europe in 1987, first to France and then England. She spent many years in academic publishing, including the Oxford University Press. She wrote two acclaimed historical novels set in Florida, Summertime published in 2015 followed by First Light. Vanessa passed away in February 2018 and her final novel was published posthumously.

LaFaye was the founder of the Marlborough Community Choir in Wiltshire, England. She detailed the impact of living with cancer in her popular blog Living While Dying. 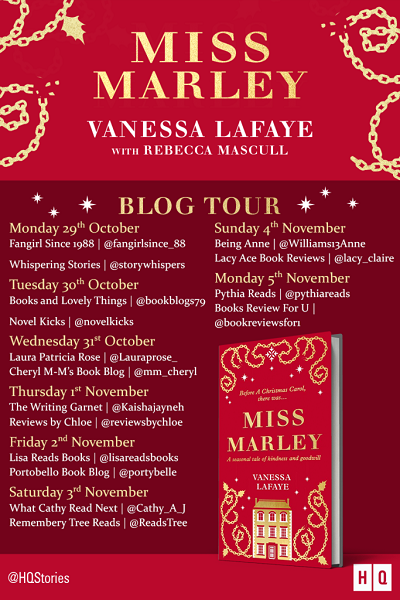