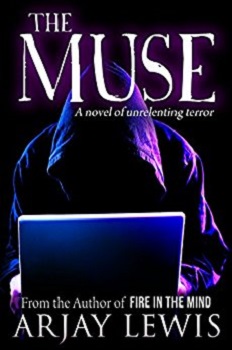 Famed novelist Jack Court has a secret: the wealthy writer is a serial killer. He has another hidden treasure, a small antediluvian creature that dwells within him and gives him youth, strength and a superhuman ability to avoid capture. On his trail is Sheriff Neil Trajan, who is certain Court murdered his wife three years earlier.

When the author is hit by a careless driver, the creature leaves him and through a series of events, ends up with lowly writer, Harold Godwine. Godwine begins to write faster and better, but is troubled by dreams of blood.

However, Jack is healing”” and devolving into something not quite human. As Court seeks the young author, he leaves a trail of destruction, pursued by Trajan and his FBI associate, Bill Morris.

Will Jack Court do anything to retrieve the companion that inspires his dark desires?

‘The Muse’ is the latest novel by American author, Arjay Lewis and I appreciated his candour in the foreword when he gives us insight into his mind-set both before and during his writing process. I was particularly drawn to the enigmatic cover design which really captures the mood of the story.

After a strong start, we meet Jack Court, a successful author who may not be hiding his macabre secret as well as he believes. If Jack is our anti-hero, then Neil Trajan, local sheriff in the small town of South Paris in Maine, is his counterpart on the side of truth, justice and retribution as for him, it’s personal.

Each chapter is quite short and concentrates on the action from the point-of-view of one of the main players or a foil. I particularly liked the succinct descriptions of the various characters as well as details of their surroundings. This gives balance and an outward everyday normality to contrast with the evil brutality of the small parasitic creature, which Court calls the ‘Other’. The creature must transfer from its injured host into a healthy body to continue to act out its fiendish fantasies. After hitching a couple of rides with temporary hosts, the creature stumbles across Harry Godwine.

I congratulate the author on his medical research regarding, among other things, the treatment and management of Tetralogy of Fallot. This provides an interesting side plot and an additional worry for Harry, a struggling novelist who has medical bills to pay. Once Harry becomes the host, he must grapple with strange dreams, disturbing thoughts and moments of absence as the ‘Other’ spurs him on.

Through the eyes of the cast, we experience a whole gamut of emotions from love and loss to fear and foreboding as well as horror and revulsion. The physical changes in Court can in part be explained by acromegaly but the author allows his imagination to extend this pituitary gland abnormality to almost limitless bounds, which must have been tremendous fun to write.

Relying too heavily on any literary device can lessen its impact and on a few occasions, Lewis uses the dream/nightmare technique as a forerunner to the action in a chapter. Whilst this worked well at the beginning of the book as a shock tactic, I think it is something to use in moderation. I also felt the ending was arguably a little twee for a hard-hitting novel. However, these are very minor observations in an otherwise strong story in which the structure was tight, the plot imaginative and the pace consistent.

I am not a huge fan of fantasy or horror and the idea of being possessed by a sentient entity is not new but the author has woven these concepts into a clever framework. If you enjoy a fast-moving thriller and don’t mind a bit of gore along the way, then give this book a try. Congratulations to Arjay Lewis; I award ‘The Muse’ a worthy four-and-a-half stars.

I have been writing since the 1990’s and my reason to write is also to entertain. I write the type of books I like to read; murder mysteries, strange and unusual tales of unnatural gifts, and odd happenings.

You’ll find my books an eclectic mix and that I often write in different genres. But, it is my hope you enjoy the characters I present, as well as the canvas of backgrounds and occurrences I paint with the simple palette of words.

I currently live aboard a cruise ship, where I present shows as the official Magic Maker. My wife and I celebrated our 20th Anniversary and I have one grown daughter whom I adore.