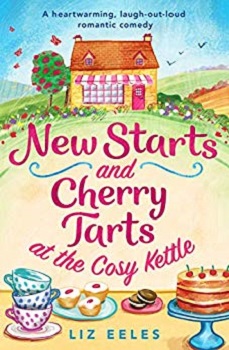 New Starts and Cherry Tarts at the Cosy Kettle

After yet another failed romance, twenty-six-year-old Callie Fulbright is giving up on love. She’s determined to throw all her efforts into her very own, brand-new café: The Cosy Kettle. Serving hot tea, cherry tarts and a welcoming smile to the friendly locals proves to be the perfect distraction, and Callie feels a flush of pride at the fledgling business she’s built.

But her new-found confidence is soon put to the test when her gorgeous ex reappears in the quaint little village. She’ll never forget the heartache Noah caused her years ago, but when they bump into each other on the cobbled streets of Honeyford she can’t help but feel a flutter in her chest…

As Callie and Noah share laughter and memories, she starts to wonder if this could be her second chance at happiness. But when Callie discovers that someone is mysteriously trying to ruin the café’s reputation… she has an awful suspicion that Noah knows who’s involved.

Was she wrong to ever trust him again? And can she find out who’s behind the lies and rumours, before it’s too late for the Cosy Kettle?

Twenty-six-year-old Callie Fulbright lives with her Eighty-year-old Gramps Stanley after her mum upped and left to live in Spain with her toy-boy. She also works at the local book shop in Honeyford. Her boss has retired and a new owner, Flora, is taking over. Not sure what to make of her new boss, Callie is eager to impress but day one doesn’t start out well with her running late after trying to persuade her Gramps not to put his name down for a parachute jump.

Flora is stern but fair and soon realises that Callie has a knack for helping people and listening to their problems. Flora also listens to Callie’s suggestions for the shop and how some improvements could increase customer numbers, including a little coffee shop at the back.

Giving her the green light, Callie sets about making a little cafe for the locals and tourists to enjoy with the help of some new local friends. The cafe, The Cosy Kettle, also gives her a reason to keep active when she discovers that the local old manor house is currently being renovated into a posh hotel and the owner is none other than Finn Shawley who used to live in the village and helping him with the design is Callie’s ex-boyfriend, Noah.

Callie and Noah split eight years ago and haven’t spoken since, but she’s all in a fluster as he is still rather hot but with the past and Noah living in New York Callie knows that nothing could ever happen between them.

I occasionally like to read a good rom-com in-between my reading of thrillers and New Starts and Cherry Tarts at the Cosy Kettle was certainly a good read, in fact, I’d say it was a superb read. I started reading it one night and only put it down when my eyelids started drooping. Upon waking I immediately picked it up again and read until I’d finished the book.

Callie is a lovely young woman with a big heart. She loves to help people and is one of those individuals that those with problems find easy to talk to. She is caring and considerate. She was in love with Noah all those years ago but he did something that broke her heart just before she headed to university, so once there she broke up with him and has never seen him since.

Noah is now a successful architect living in New York. He is back in Honeyford helping his brother Finn in his latest project to get his daddy’s attention. Finn has always been a lady’s man, where Noah was in love with Callie and hadn’t even realised what he did was the reason for their break-up.

Flora is a woman trying to make a success of her business after her mum left her some money. Her husband is not very supportive of her and doesn’t think she should have invested in the book shop.

My favourite character has to be Stanley. He was so adorable. Turning eighty has seen him have some sort of epiphany (and reading a book on life). He has decided that he’ll be dead soon so why not make the most of living. He wants to make the most of the time he has left, which includes dressing how he likes – think skinny jeans and Taylor Swift T-shirt. Saying what he thinks, even if it upsets others and maybe chaining himself to a few trees to protest.

The book is filled with warm-hearted moments, has plenty of charming characters and a few wrong’uns too. Plus there are lots of laugh-out-loud parts.

This is a book that will have you smiling from ear-to-ear throughout and leaving you with a desire for a cup of coffee and a slice of cake!

Liz began her writing career as a journalist and press officer before deciding that she’d rather have the freedom of making things up as a novelist.

Being short-listed in the Corvus ‘Love at First Write’ competition and the Novelicious search for a new women’s fiction star gave Liz the push she needed to keep putting pen to paper …. and ‘Annie’s Holiday by the Sea’ (her first published novel) is the result.

Liz lives on the South Coast with her family and, when she’s not writing, likes to spend time walking by the sea, and trying to meditate. Her ambition is to be serene one day …. she’s still got a long way to go. 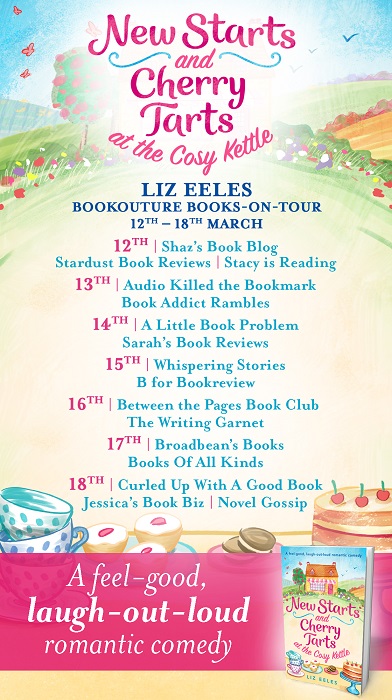