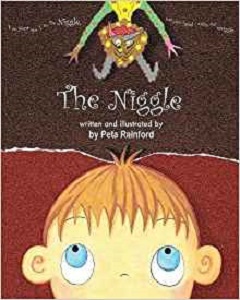 The Niggle tells the story of Joe Jackson, a little boy who has never felt fear. Until the day a miniature monster swims in his ear!

The monster is the Niggle, a tiny terror, who whispers worries in Joe’s head and makes him afraid. Will Joe Jackson let the Niggle win? Or will he learn to overcome his fears?

The Niggle, through humour and rhyme, tells young children that it’s OK to feel fear. In fact, you can’t be brave if you don’t. A colourful, rhyming picture book for 5-8 year olds.

From the age of two, Joe Jackson was a very brave little boy. The dark didn’t bother him, nor did heights, and going fast downhill on his trike was just pure fun. Then at the age of five, Joe had an accident and this was when ‘The Niggle’ crawled into his ear.

From that day on, even though Joe tried to be brave, he would start having doubts as Niggle told him to be scared. One day, he needed to be brave, but the Niggle was telling him he couldn’t. That’s when the voice of Resolve appeared and helped Joe conquer the Niggle and his fear.

‘The Niggle’ is written in rhyme with short paragraphs that are surrounded by full page illustrations, which really emphasise the story and bring it to life. There are also parts of the illustrations that are left uncoloured, so the reader can colour them in.

I like how Ms. Rainford has written what the Niggle tells Joe in in his ear in swirly writing. This lets children know that this is his Niggle speaking.

From the beginning we meet Joe at two, when he doesn’t have a care in the world, nor any fear. He doesn’t understand how dangerous some of the things he does could be. Then as he gets older, and through an accident that scares him, we get to see Joe as a child that although wants to do some of the dangerous things, has this little voice in his head telling him not too.

This little voice isn’t really a bad thing as long as it doesn’t take over, which in Joe’s case it does. This is until he is needed to be very brave, when he realises that he is braver than he thought. It was nice to see Joe back with some confidence again.

This is a very helpful book, particularly for children who are needing help combating their own fears. I especially love how the author, through the voice of Resolve, talks to the reader about being strong.

Peta grew up on the Isle of Wight so long ago she can remember dancing to the Bay City Rollers, Saturday mornings watching Multi-coloured Swap Shop and buying crisps from the school tuck shop for 2½p.

As a child she loved words and was always reading. She loved painting and drawing too, but she had no idea what she wanted to do when she grew up.

She studied English at York University and then worked in London as a business journalist and editor for 14 years. In her spare time she went to art classes and even studied fine art at St Martins, but she still had no idea what she wanted to do when she grew up.

She had a go at running a small hotel with her husband in wild and windy (but beautiful) Exmoor and it went quite well, but after a few years they needed a sit down. So they sold up and moved back to the Isle of Wight.

It was here that Peta, now balancing the roles of freelance writer and mum, decided to write and illustrate her first book for children. It was a revelation to her: a way of combining picture making (colouring in) with her love of words (silly stories) – not to mention an outlet for her awful jokes.

It may have taken more than four decades, but finally, Peta knows what she wants to do when she grows up.