On an ordinary Saturday morning in 1996, the residents of Nightingale Point wake up to their normal lives and worries.

Mary has a secret life that no one knows about, not even Malachi and Tristan, the brothers she vowed to look after.

Malachi had to grow up too quickly. Between looking after Tristan and nursing a broken heart, he feels older than his twenty-one years.

Tristan wishes Malachi would stop pining for Pamela. No wonder he’s falling in with the wrong crowd, without Malachi to keep him straight.

Elvis is trying hard to remember to the instructions his care worker gave him, but sometimes he gets confused and forgets things.

Pamela wants to run back to Malachi but her overprotective father has locked her in and there’s no way out.

It’s a day like any other, until something extraordinary happens. When the sun sets, Nightingale Point is irrevocably changed and somehow, through the darkness, the residents must find a way back to lightness, and back to each other.

Saturday 4th May 1996, Morpeth Estate London. Home to three tower blocks including Nightingale Point. Within Nightingale Point lives twenty-one-year-old Malachi and his younger fifteen-year-old brother Tristan who live alone after their mum died and their Grandmother deemed them old enough to look after themselves.

There is nurse of over thirty-three years Mary who is waiting for her husband David to return from one of his long jaunts abroad searching for his stardom. Elvis, who has special needs. He loves his home but not so much his carer Lina who is pretty and has nice nails but he knows she doesn’t want to be caring for him and would rather be out with her friends.

We also have teenager Pamela whose dad is exceptionally strict. He doesn’t like her associating with the other residents so when he leaves the property he locks her in their flat so she can’t leave. She was a keen runner but her dad won’t even let her do that anymore.

The residents of Nightingale Point are going about their business as they do every day. Mary can feel the danger in the air but she tries to ignore the nagging worry in her stomach. She should have listened to it, but what could she have done anyway? A cargo plane is on a dangerous course and it is heading towards the tower block but will all the residents make it out alive? For those that do, will their lives ever be the same again?

Nightingale Point is an extraordinary book told in the third person and from various POV. It is also split into different periods. Before, After, Ten Days Later, One Month Later, Three Months Later, Six Months Later, and Five Years Later.

Author Luan Goldie was touched by the real-life events in 1992, Amsterdam when a cargo plane crashed into a tower block killing forty-seven people. It wasn’t only the crash that touched her but the aftermath for the people who survived who had nothing as everything they owned and their homes had been destroyed yet they had to fight for help. Over twenty years later she saw the same happen with Grenfell with the surviving residents having to fight to be treated with dignity, these events are what sparked her imagination for this book and you can tell how much passion and love has gone into this book.

I normally have a bad record with multiple POV books but this one was so well written it didn’t confuse me, the different characters voices came across perfectly and you could feel their every emotion. It’s hard to believe that this book has been written by a debut novelist, there isn’t a moment within the book I didn’t enjoy and the writing was flawless.

The carnage of the event and the chaos and then the calm that came afterward perfectly played out in my mind, like watching a movie. I felt sorry, hurt and anger for the residents and I just love it when a book makes me get emotionally involved. I would have to say this is one of the best books I have read this year and you definitely need to read it.

Luan Goldie was born in Glasgow but has lived in East London for most of her life. She is a primary school teacher, and formerly a business journalist. She is the winner of the Costa Short Story Award 2017 for her story ‘Two Steak Bakes and Two Chelsea Buns’.

Her short stories have also been long and short listed by Spread the Word and the Grazia/Women’s Prize First Chapter competition. Nightingale Point is her debut novel. 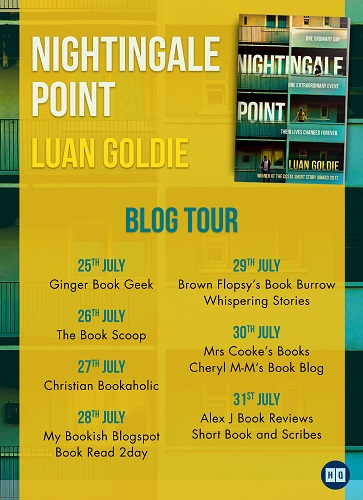