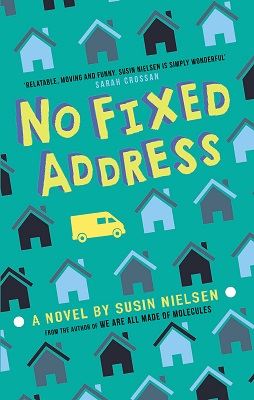 Felix Knutsson is nearly thirteen, lives with his mother and pet gerbil Horatio, and is brilliant at memorising facts and trivia. But Felix and his mom Astrid have a secret: they are living in a van.

Astrid promises it’s only for a while until she finds a new job, and begs Felix not to breathe a word about it. So when Felix starts at a new school, he does his very best to hide the fact that most of his clothes are in storage, he only showers weekly at the community centre, and that he doesn’t have enough to eat. When his friends Dylan and Winnie ask to visit, Felix always has an excuse.

But Felix has a plan to turn his and Astrid’s lives around. All he needs is a little luck and a lot of brain power . . .

Twelve-year-old Felix lives in a van with his mum Astrid in Vancouver, Canada. They used to live with his Grandmother but when she died they had to move into an apartment, but then they lost that and moved around into smaller places until they ended up living in the van.

Astrid suffers from depression and so keeping a job is hard for her meaning that they never manage to save up enough money to find a place of their own. Felix is attending school but he has to go in early each day to have a wash and change in the disabled toilets so that no-one realises that he is homeless.

When a TV games show hosts a junior edition with the prize fund for the winner set at $25,000 Felix has an idea. He’s going to win and use that money to get the two of them a home.

No Fixed Address is a book that will open young people’s eyes to the plight of the homeless and make them realise that it is not just people sleeping in doorways that are homeless. The book begins with a scene in a police station and then moved back in time to when the family became homeless.

Felix is a very smart kid, he understands the world better than a lot of people and thus explains to the reader his version of lying and when it is or isn’t justified. He also explains in great detail the situation he is in and how he feels. He doesn’t like having to lie to his friends, Winnie and Dylan but he feels he has no option as his mum has made him believe that if he tells anyone then the social services will get involved and they are bad people.

I love how real the book felt. In the past year, I think this is the third book I have read about a young homeless person and it is wonderful to see these books as hopefully, they will make the readers understand the plight of what some kids are going through.

It’s not a doom and gloom, sob story of a book though as there are plenty of light-hearted moments too. The book is engaging and I love that it is set out in months. It’s a real eye-opener of a book and well worth a read.

Susin got her start feeding cast and crew on the popular television series, Degrassi Junior High. They hated her food, but they saw a spark in her writing. Nielsen went on to pen sixteen episodes of the hit TV show. Since then, Nielsen has written for over 20 Canadian TV series. Her first young adult novel, Word Nerd, was published in 2008 to critical acclaim. It won multiple Young Readers’ Choice Awards, as did her second novel, Dear George Clooney: Please Marry My Mom. Her third novel, The Reluctant Journal of Henry K. Larsen, was published in August 2012. It went on to win the Governor General’s Literary Award, the Ruth and Sylvia Schwartz Award, the Canadian Library Association’s Children’s Book of the Year Award, and a number of Young Readers’ Choice Awards.

Her books have been translated into multiple languages. She lives in Vancouver with her family and two naughty cats.