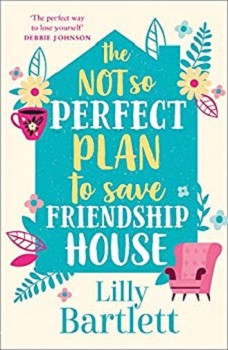 The Not So Perfect Plan to Save Friendship House

Meet Phoebe, who’s 28, and Laney, Dot and Maggie, who are 68, 78, and none of your business. Together they’ll prove that age doesn’t matter when it comes to friendship, belonging and an unquenchable zest for life.

A hilarious, uplifting novel about the ties of community, the strength of love and how nobody is truly ordinary.

When Framlingham’s famously all-female senior living home goes co-ed, a war between the sexes is declared.

Stuck in the middle, chef Phoebe Stockton is desperate to help her friends plot to keep the community that means so much to them. It’s become her life raft, too. She finds comfort in her beloved career that might finally make her parents proud. But Phoebe’s darling Nick is lining up on the other side of the battle, and their relationship is suffering collateral damage.

The stakes couldn’t be higher. If the home’s owner can’t improve business by moving the men in, he’ll have to evict everyone.

The women aren’t about to let that happen.

Twenty-eight-years-old Phoebe Stockton works as a chef at a ladies care home in Framlington, Suffolk. She is a qualified chef who used to work in a restaurant until it burnt down (no fault of hers).

The care home has been struggling financially so owner Max has an idea to raise some money, move his father Terrence in and sell his cottage. This news doesn’t go down well with the ladies, especially as Terrence is well-known to them and is always up to mischief.

However, it would seem that moving his father in was the tip of the iceberg. Max decides that now the home is co-ed he can now allow men to apply to live there too. The ladies are not impressed. They like it being all female and they are determined to let Max know exactly what they think of his plan.

The Not So Perfect Plan to Save Friendship House is a fun, energetic (even if most of the characters are elderly) book that puts a smile on your face. The book is told from the point of view of Phoebe and opens with the death of her mother, a mother she had a turbulent relationship with. Whilst the main story is set around the home and the residents, Phoebe’s Mums death plays a secondary role, especially when she discovers information she never knew about her and the fact that her father doesn’t seem to be bothered that his wife has just died.

Another secondary plot is that of a love interest in the form of Occupational Therapist Nick who works at the home. The two clearly like one another but they skirt around each other, neither willing to make the first move. Phoebe does make a bit of a fool of herself in front of him though after drinking alcohol after having sedative – Trust me, never ever do this. There is also the matter that Max the care home owner seems to treat Nick like dirt and pays him very little, yet he stays and does more than his fair share of other jobs around the home too.

The most delightful characters in the book are the residents, even Terrence. Maggie, Sophie, Dot, and Laney are just beautiful older women who have all lived varied lives and know what they want in their senior years and it’s not men spoiling their care home. They each had their own personalities and their mannerisms and actions made you feel like you were stood in the care home watching them. I just loved them all – even Maggie who is so stubborn.

The book is easy to read and uplifting. I just adored it and read it in one sitting, I didn’t want to put it down. Phoebe’s voice is authentic and it was lovely to get to know her and all the other residents and staff too.

Lilly is the pen-name of Sunday Times and USA Today best-selling author, Michele Gorman, who writes best friend-girl power comedies under her own name.