Once a Liar by A.F. Brady – Book Review

Once a Liar by A.F. Brady – Book Review 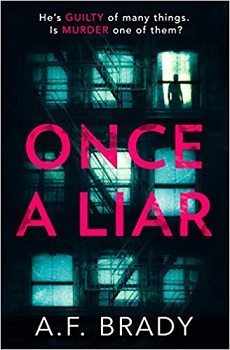 Did he kill Charlie Doyle? And if he didn’t…who did?

Peter Caine, a cutthroat Manhattan defense attorney, worked ruthlessly to become the best at his job. On the surface, he is charming and handsome, but inside he is cold and heartless. He fights without remorse to acquit murderers, pedophiles and rapists.

When Charlie Doyle, the daughter of the Manhattan DA―and Peter’s former lover―is murdered, Peter’s world is quickly sent into a tailspin. He becomes the prime suspect as the DA, a professional enemy of Peter’s, embarks on a witch hunt to avenge his daughter’s death, stopping at nothing to ensure Peter is found guilty of the murder.

In the challenge of his career and his life, Peter races against the clock to prove his innocence. As the evidence mounts against him, he’s forced to begin unraveling his own dark web of lies and confront the sins of his past. But the truth of who killed Charlie Doyle is more twisted and sinister than anyone could have imagined…

Peter Caine is a defense attorney, working and living in Manhattan. The book opens with Peter attending the funeral of his ex-wife Juliette. After her death Peter is having to take in his teenage son Jamie, a lad he hasn’t really had anything to do with for the last 16 years of his life.

Peter lives with her girlfriend Claire and she and Jamie seem to hit it off. He also has been known to have affairs, including one that ended his marriage to Juliette after he had an affair with the DA’s Step-daughter Charlotte.

After a gala event brings Peter and Charlotte back together again, Claire gives him an ultimatum, but it’s not long before Charlotte is brutally murdered and all the evidence seems to point to Peter being the culprit. It’s now up to Peter to prove his innocence, but who would want to frame him? It’s a long line, so take a seat and enjoy the ride!

It’s not often I read a book where the main protagonist is a hateful, disrespectful and outright self-centred arse, but that is who Peter is. He wasn’t always this way but after working for Juliette’s father who was the same sort of man, he lost all empathy and only cared about money, winning and how he looked in others eyes.

The book is told in alternating chapters of Then and Now. The pace is quite slow which is not something I particularity like about a book, especially a thriller, but it worked for this one.

In case you have read the synopsis and wondering who Charlie is – I was thinking the same when I was reading the book – It is actually Charlotte, Charlie is the name Peter calls her.

The murder of Charlotte (Charlie) happens quite a way into the book giving you time to work out what type of man Peter is and was and his backstory. I can’t say I felt sorry for Peter being wrongly accused of someone’s murder – This was a man who spent his career getting murderers, rapists, etc off from their charges even though he knew most of them were guilty. He enjoyed the challenge.

The writing was superb and I was held to the pages at first waiting for the murder I knew was going to take place to occur and then waiting for Peter to put all the pieces together. If you like a good thriller and don’t mind them being slow and jumping back and forth in time then give this book a read.

She is a life-long New Yorker, and resides in Manhattan with her husband and their family. 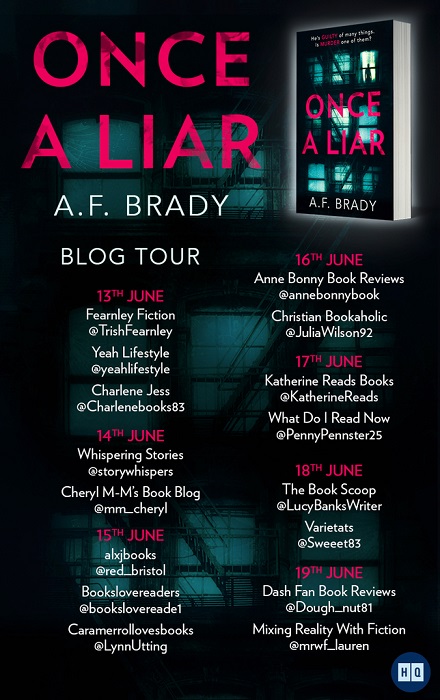