One Among Us by Paige Dearth – Book Review

One Among Us by Paige Dearth – Book Review 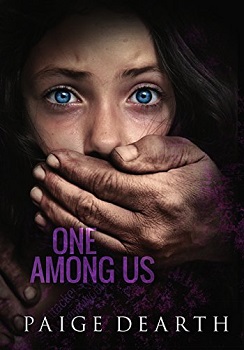 A kidnapped girl is forced into human sex trafficking.

Eleven-year-old Maggie Clarke is abducted from her loving family and thrust into the indescribably horrific and largely unknown underworld of human sex trafficking. In captivity, Maggie’s life turns into a nightmare most children couldn’t imagine. When Maggie isn’t being sold to clients, she focuses on caring for Seth, a young boy who was also abducted.

With the help of Detective Rae Harker, the Clarkes’ frantically search for their daughter. Haunted by his own demons, Detective Harker vows to find Maggie – Dead or alive.

Years after Maggie is abducted, a strange man approaches her with a dangerous proposition and she risks everything to break free of the network of unsavory characters that control her. Not even she can know how far she will go to get even with the people who ruined her life.

An unforgettable story of courage and survival, One Among Us serves as an eye-opening reminder that horrible things can happen to anyone – It’s how people deal with their circumstances that matters.

‘One Among Us’ is the third novel from American author, Paige Dearth. The chapters are short and the story unfolds in chronological order, making it easy to follow. It is told in the third person and the past tense and follows the life of Maggie, an eleven year old girl who is kidnapped and thereafter systematically abused.

She quickly finds that she is not alone in her plight as Seth, a four year old boy, is taken at the same time and there are three other children being held captive by a depraved individual in an old prison. We know from the outset this is a story of survival, as over the next 600+ pages, Maggie’s ordeal is documented by the author, herself an abuse survivor.

From a literary perspective, I think it’s fair to say that it is somewhat confused structurally. One major issue was persistent head-hopping in every section which made for muddled messages via a myriad of personal thoughts from multiple minds. I think a thorough edit would have addressed this. There is a lot of detail at times but at others, particularly towards the end, events seem rushed, making for an uneven pace. The connection between Maggie and Seth is touching and at times bitter-sweet but the remainder of the cast needed more depth of personality. Currently, it reads like a first draft.

Many horrific events were covered in a matter of fact way, making the impact a little less shocking. It seemed each child shared the same sentence construction and mind-set but maybe this can be explained by their captive conditioning?

Maggie seemed to be incredibly resilient despite the most appalling abuse at every level. At no time did she succumb to depression or self-harm. It seems a little incongruous that she was very attractive and therefore a valuable commodity to her captors, yet the punishments they meted out to her could have seriously compromised her earning ability. She was very fortuitous in meeting kind-hearted benevolent villains and towards the end the plot became a little less believable.

Another aspect of this abhorrent practice is the effect it had on abductees’ families and the coping mechanisms they employed. We spend a bit of time with Maggie’s parents and the detective who has sworn to find her. The author also touches on issues of reintroduction, along with changing family dynamics and I would have liked her to have cut some of the other scenes and expanded on these areas a bit more.

Anyone who reads this tale cannot fail to be affected by its deeply disturbing and harrowing contents. The author pulls no punches and directly addresses sex trafficking, child rape, pornography, mental and sadistic physical torture, degradation and supplication.

At this point in a review I normally suggest a target audience but in this case I am struggling. This is a very dark and depressing read with each chapter hook leaving the reader with a sense of foreboding. If you are of a sensitive nature, it will haunt you.

I suspect the author has written this tale as a cathartic exercise and for that she has my unreserved admiration. The physical size of this book is daunting but nonetheless I read it in less than a week. With a comprehensive edit it would be worth a higher rating but currently I award three-and-a-half stars.

Paige Dearth, a victim of childhood sexual abuse, was raised in a poor family in Philadelphia. By her early twenties, she was a new mother with a heroin-addicted husband. But through sheer determination, Dearth would earn a master’s degree and spend twenty-eight years working in corporate America. She realized her long-time dream of becoming a writer upon the 2011 release of her first novel, Believe Like A Child. Two more novels followed: When Smiles Fade and One Among Us.

Dearth credits her ability to produce exciting and emotionally provocative stories to years of voraciously reading thrillers and horror novels. She aims to inspire her readers to think about the lifelong ramifications of traumatic childhood experiences.

Dearth currently lives in Philadelphia with her husband. She enjoys healthy cooking and has plans to add a cookbook to her literary credentials.