The Other Side of the Street by Helen Carey – Cover Reveal

The Other Side of the Street by Helen Carey – Cover Reveal 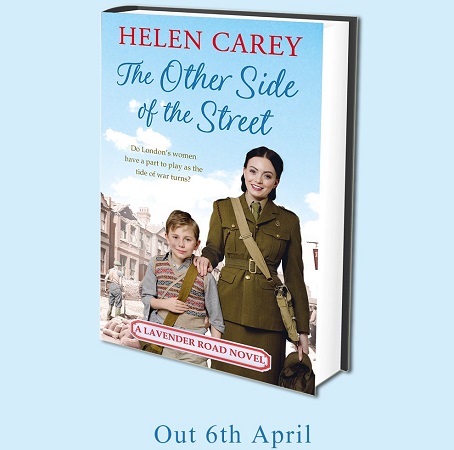 THE OTHER SIDE OF THE STREET is an irresistible, romantic and heart-warming saga of south London’s women during the Second World War. Not to be missed by readers of Katie Flynn, Ellie Dean and Lilian Harry.

It’s 1944. London’s citizens are weary of air raids and rationing. But there are rumours of an invasion of France. Is the tide of war turning?

Young widow Louise Rutherford longs to find a new husband and when a handsome American officer arrives to recruit volunteers for a secret project, she senses an opportunity. Her efforts are hampered, though, by her determination to help ten-year-old war orphan George Nelson.

On both sides of the street there are challenges to face. Jen Carter’s relationship with Henry Keller is threatened when an old flame reappears in her life. Her mother Joyce’s decision to take romance slowly threatens to become a dangerous mistake when the V1 rockets start hitting London.

In this atmospheric novel, Helen Carey brings to vivid life the spirit of the war years with all their heartache, joy and drama.

Having spent time in various different parts of the world, Helen Carey now lives in Pembrokeshire, West Wales, in a beautiful location overlooking the Irish Sea. She has had a number of jobs and her varied experiences of working as a chalet girl, a waitress, a travel agent, an oil trader, a management consultant and in the British Army have all featured in one form or another in her books.

She teaches Creative Writing at University level is a Fellow of the Royal Literary Fund. Her aim is to entertain, and her sense of character, story structure, pace and humour all combine to create compelling, page-turning novels which attract fans from all over the world.