Ouija – Is There Anybody There? by Rose Zolock – Guest Post

Ouija – Is There Anybody There? by Rose Zolock – Guest Post

Today on the blog we welcome author Rose Zolock, with her guest post ‘Ouija – Is There Anybody There?‘, as part of the blog tour for her new book, ‘Medium Wave’, which was released on 6th April 2018. 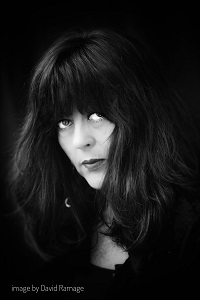 Her Irish grandmother first told Rose about the Banshee when she was just a small child. How the wailing sound of the spirit of the dead and dying could be heard when someone was about to pass.

It was family folklore that the women in the family had ‘the touch’, the ability to see spirits and other dimensions. Rose listened and grew up fascinated by those who claimed to have supernatural or psychic abilities.

Rose does not claim to have those powers. Take her to Venice in February when the mist swirls over the canals, walk by her side along the darkened streets of Greenwich Village in New York City in high summer, listening to a ghost walk tour guide tell the stories of death, murder and the unexplained – Rose would say those stories and our belief in them gives her a power to see into the shadows within our imagination.

As a journalist, Rose takes every opportunity to explore and investigate strange stories, myth and folklore. Living in rural Yorkshire, with a rich library of ghost stories and literary tradition, Rose also has a sceptical and forensic insight into those who peddle the stories which feed our imagination but of which we have yet found no proof. She has listened to the debunkers who argue against those believers who are convinced that sand the dark side exist.

Rose’s mind is open. Is yours?

Ouija – Is There Anybody There?

In the world of those who believe in, or have an interest in the paranormal, using the words of author M.R. James, here’s a warning to the curious: never use a Ouija Board.

If you have nothing but the smallest amount of belief in the possibility of the existence of other worlds and different dimensions – even if your twenty first century mind rationalises otherwise and that you think the horror movie scenario of dark forces being unleashed by unsuspecting users is all pure hokum – you should still take care and avoid even the unlikeliest of possibilities.

At best, what was once a parlour game and sold in toy shops as a mere plaything, is simply that – a toy. At worst, it’s use potentially releasing the power of the unknown and who, or what it may reach is, perhaps, something which should not be tampered with.

When I was a child I used to have many board games but I was never allowed to have a Ouija Board. I remember seeing them in ornately decorated boxes in toy shops, inside the box, the board itself in the classic form with the words ‘yes’ and ‘no’ in the top left and right corners, the alphabet below, a few graphics of moon and stars and the word ‘goodbye’ at the bottom. I was told in no uncertain terms that wasn’t coming into the house and that I was never to play with it if any of my friends owned one. Inevitably, that made me very curious indeed. The planchette used for the messages sometimes had a small magnifying glass inside so you could more clearly see which letter the curious hands had guided it towards. In the absence of owning a genuine Ouija Board we improvised – when our parents were not around – with a drinking glass and an alphabet of cut out letters on a tin tray. It never worked, apart from there was always one kid who deliberately pushed the glass – usually to spell out rude words, as children of a certain age tend to do.

The Ouija Board in its commercial form was introduced to the world back in 1890 by an American businessman named Elijah Bond. He and his associates marketed it as The Wonder of the Nineteenth Century, peddling clairvoyance and saying it would answer your questions. Mr Bond’s gravestone heralds him as the inventor of the Ouija Board and one of Bond’s employees claimed the word Ouija to be a near translation of the Egyptian term for ‘good luck’.

Although known in a form before the version we recognise today, the ‘talking board’ as it was then known, became popular in the period after the American Civil War as families tried to come to terms with the losses of that conflict. In the late Victorian period the growing spiritualist movement adopted the more modern and familiar form of the Ouija Board as part of their arsenal in the quest to communicate with the dead. There are stories of strange happenings for those who used them, deaths, predictions of death and reports of sightings and strange occurrences after the board had been used. The links with the occult and to dark forces abound. I have no idea if this is just an overactive imagination or whether the board can really summon up things from beyond our realm. Whatever the reality, in my mind, it’s just not worth the risk.

Science says – there are several studies – that seeing the planchette moving over a Ouija Board will persuade you that some other worldly presence is channelling itself through you to deliver a message, or answer a question, but that it’s far more likely to be your subconscious mind influencing your muscles.

In my novel, Medium Wave, I explore the world of the paranormal. Becky Moran is a radio host who has convinced people she can hear the dead speak. She was lying. But not anymore. Her journey into the unknown, set against the backdrop of the media, reveals a world of unknown dimensions and horror. Beware the radio…

I saw a Ouija Board for sale in an antique shop recently. It looked old, possibly Edwardian. The board itself looked like it was made from mahogany. It was well used, had an older style planchette with no glass window and you could see where eager fingers had pressed onto the wood. The board was worn, the polish faded and scratched. The lettering was faded gold leaf. I was tempted to buy it, this antique parlour game, to add to my collection of the macabre, another historical remnant of our superstitious belief. The price wasn’t high – there isn’t much demand – and there was no provenance of who had owned it or where it had come from. I saw my hand move towards it and reached in to look closer. At that moment a child came and stood by my side. Her bright eyes were fixed on the object. She was about ten. ‘What is it’? She asked. Her mother came and looked over my shoulder and jerked her daughter away. ‘It’s not for you’, she said brusquely and glared at me. My hand fell back to my side. ‘Nor me,’ I said quietly and I walked away.

You would be well advised to do the same 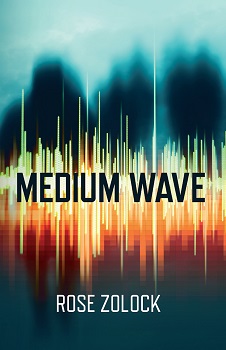 Becky Moran has built a career claiming to talk to the dead. A successful clairvoyant medium, a Cambridge graduate with her own radio show ‘Medium Wave’ and a team dedicated to crafting the celebrity myth – because Becky Moran is a fake. Until, one night, something supernatural, inexplicable, breaks through live on air as she is broadcasting. Becky Moran discovers the paranormal is real, the dead can indeed speak and she is being pursued relentlessly towards a battle for her very survival.

‘This thing has no defined shape. Whatever energy exists within it, it cannot settle on a shape. The strands of darkness curl out and then wrap back inwards. The bulk of the shadow becomes concave, then bulbous, the height building in on itself but lacking any skeletal structure to wrap itself around. There are no eyes, no clearly defined head shape. It is creating itself from darkness, like a swirl of ebony ink dropped into a vat of putrid water, spreading silently….’

You can find out more about Rose Zolock by visiting the website/social media sites below. 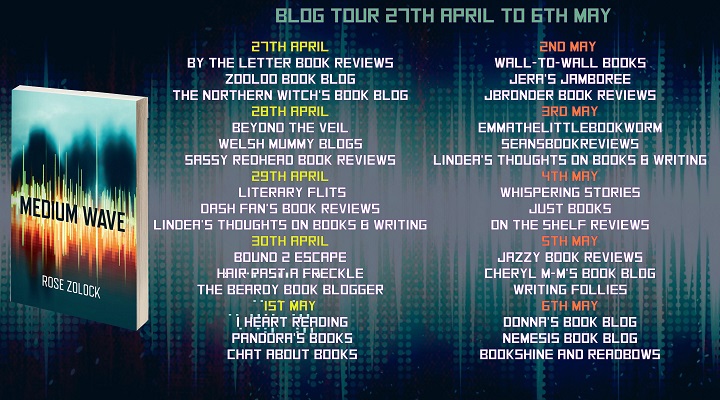