Inspiration for Outremer by DN Carter 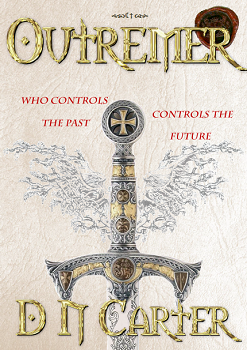 An epic love story must overcome religious divide and a plot to eradicate two blood lines, as the Crusades and the search for the ancient mysteries of the Holy Grail gather momentum.

Raised by his father in La Rochelle, France, Paul Plantavalu is known for his artistic nature, inquisitive mind and Christian faith. He also has an unshakable love for his Muslim childhood friend, Alisha al Komaty. Courageous and outspoken, she returns Paul’s love. But their path is paved with obstacles; religion, war, political chaos and a mysterious enemy determined to destroy their family lines.

Sometime between 1110 AD and 1120 AD in the aftermath of the first crusade, a small band of nine knights — the founding knights Templar — recover ancient precious artefacts left by a former, advanced civilisation, beneath the City of Jerusalem. Ruthlessly guarded, the secrets revealed by this discovery are highly prized by powerful and dangerous forces far and wide; the repercussions of their capture are inextricably linked to Paul and Alisha. As Paul starts to experience dark and vivid dreams and the fragile balance of peace starts to crumble, it will fall to an enigmatic man known as Kratos and his female warrior protégée Abi Shadana, to safeguard Paul and Alisha.

Paul and Alisha’s love story weaves between the threads of our reality and other realms — from the Druids to the Sufi mystics, the Magi of the East, the secret political arm of the Knights Templar and the Isma’ilis, the Assassins. Knights and pilgrims alike will witness some of the darkest battles ever fought. The discovery of a unique sword’s lethal power and whispered connections to King Arthur and the Holy Grail lead Paul and Alisha to question if their lives ever be the same again.

Chretien de Troyes and his Grail romances, plus my love of castles and ancient ruins were my original inspiration into the subjects covered within Outremer. But I wrote to enlighten is the simple truth…or at least try and provoke the reader to think and start upon a path of their own research and most certainly not just accept my words, but to challenge all that I write. I cannot really put a time frame upon when I started to write Outremer for it has been within me growing as a kernel of a story since a very young age. I can state with all clarity that the first time I sat down and wrote the title and saved it as a word document was back in 2005.

It was almost a year later that I finally sat down and penned the basic story time line together. I knew then that it was going to be a massive undertaking…but I vowed that once I had started, I would finish it. It was the research that took the most time to ensure accuracy. From the smallest detail of clothing to major historical facts as documented, to religious doctrine and philosophies and only then, when I felt confident enough I had the full facts, did I fully commit to writing full time.

It was in early 2014 I sat down and finally began to flesh out the original story time line I had penned back in 2005. But as I began it soon became apparent my original idea of penning a 140,000 word book was woeful wishful thinking and grossly underestimated the extent and volume of material I was trying to convey. So one book of 300,000 words became two, then three and finally four volumes. 1,240,000 words! I did not type ‘The End’ until December 2015. I was then informed that only then would the hard work really begin editing and proofing etc.

I learnt that for nearly all of human history our world was once viewed as an enchanted place and myths emerged as an attempt to explain unknowable mysteries, but as material and rationalist ideas took over, our spiritual values declined in direct proportion. Once uprooted from the world of symbols, the art that created them was lost and separated from its links with myth and sacramental vision. But when the usefulness of a myth or legend has exhausted itself, it dies…and any artificial means to keep it alive only serves to make those very actions and symbols of that myth, counterproductive. It becomes out dated with the present times, so has to be completely changed and written a new…and that is what I have tried to do within the pages of Outremer. A strong and bold claim perhaps, but you must be the judge of that once you have read all four volumes of Outremer…

So when you open Outremer, then depending upon your imagination and from what I describe, you will wear the armour of a knight; feel the weight of the chain mail and the smell of iron. You will find yourself in the middle of some of the darkest battles ever fought. You will meet people who really existed and you will share their experiences as this story becomes a part of you. And when you have finished and close the cover on the last page, then the world that was within it, will forever be within you. That is why Outremer will become unique and very personal to you alone as you walk through their pages and history.

After strange and vivid experiences whilst living in Cyprus as a child, author D N Carter has been fascinated by the history, myths and legends of the Middle Ages and mankind’s past. As he got older travels to Pyramids of Giza in Egypt, the Languedoc region of France and the deserts of Arabia fuelled his enthusiasm.

While not decoding maps and mathematical codes D N Carter enjoys adventure sports from parachuting to microlight flying. Today he divides his time between East Anglia in the UK and the south of France with his family. 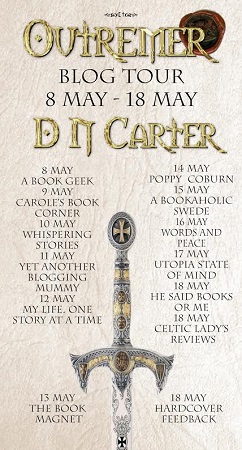