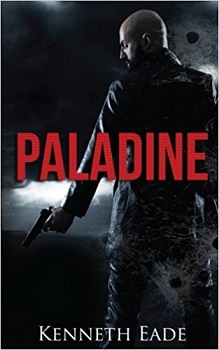 Robert Garcia was an unremarkable man, tapped out of a promising military career to become a death squad assassin for the CIA. Retirement was not in the cards for Robert, so he disappeared instead.

After he comes out of the cold to answer the call to aid a fellow soldier facing a bum rap, he is thrust back into the spotlight when he kills a terrorist, thereby saving dozens of lives.

He finds gainful employment in the slaughter of jihadists, which sparks an urban social media legend that Robert, a dangerous and unfeeling assassin, is a living paladin, whose mission is to rid the earth of evil for the betterment of mankind. Social media gives him the name: “Paladine” and God help whoever gets between him and his next target.

Robert Garcia knows all about war. Born as John Richards jr., son of a Lebanese mother and an American military career men, his own career was clear since he was a little boy. He made Captain in the US Army, his Arabic looks, and second language, made him a great asset for his country in the fight against terrorism as a member of a band of assassins.

After retiring he tried to live a normal life as Robert Garcia, but after testifying in court for a fellow soldier he doesn’t feel safe anymore and fears his new identity will be exposed. Therefore, he parts with his so-called normal life and hits the streets.

At a McDonald’s, while munching his burger, Robert becomes aware of a man with a gun, and in a fraction of a second, due to his skills, shoots the assassin and immediately flees the scene. This incident is the beginning of the legend of Paladine. The man who kills terrorists and disappears like a ghost.

Billionaire Bryce Williamson lost his son in a terrorist attack a few years ago and the idea of getting vengeance on the one responsible, an ISIS soldier, for what he did to his son starts to grow in Williamson’s head, he wants Paladine. He establishes a foundation for a fight against terrorism within a partner website on the Dark Net where he contacts Paladine and hires him for his own fight against terrorism.

During his journey through the US, leaving a trail of dead ISIS fighters, Robert is chased by the National Counter-terrorism Center, FBI, and a Detective from Phoenix, living a life both of a hunter and a hunted.

Kenneth Eade is covering issues we all know and worry about, terrorism, ISIS, and the fight against them, this is part of our lives nowadays. Therefore, it was about time to put it all into a novel.

The author has plotted the story excellently. It is easy to read due to the short chapters and Eade’s engaging writing style. Although it is a serious topic, I enjoyed reading about Paladine. The idea that someone is out there taking charge is kind of comforting. The main character, Robert Garcia, is a killer, but nevertheless he seems to have his heart in the right place. I think it is difficult to build a character, being a killer but also a good man, but Eade accomplished this task very well.

This book is a gripping thriller about terrorism and how people manage to coping with it, one way or the other. Although, everyone has to decide for him, or herself which way may be the right one. I think telling a story like this one is very important, therefore I thoroughly recommend you give it a read.

Described by critics as “one of the strongest thriller writers on the scene,” Author Kenneth Eade, best known for his political and legal thrillers, practiced law for 30 years before publishing his first novel, “An Involuntary Spy.” Eade, an up and coming author in the legal thriller and courtroom drama genre, has been described by critics as: “Brilliant when it comes to creating complicated, intriguing stories with mind-blowing surprises,” who have said that his novels “will remind readers of John Grisham, proving that Kenneth Eade deserves to be put on the same lists with the world’s greatest thriller authors.”

Eade is the winner of the 2015 Beverly Hills Book Awards for best legal thriller, the 2016 winner of a bronze medal from Reader’s Favorite Book Awards, and is a current quarter-finalist in the Publisher’s Weekly BookLife Prize for Fiction. He has authored fourteen novels which have been translated into Spanish, French, Italian and Portuguese.

Eade’s writing career began in 2011, writing opinion pieces for the Los Angeles Daily Journal. Two of the articles centered on the subject of the unconstitutionality of the now defunct Monsanto Protection Act, and the dangers of genetically modified foods and neonicitinoid pesticides and their adverse effect on bees. This led to his first book, the non-fiction work, “Bless the Bees: The Pending Extinction of our Pollinators and What You Can Do to Stop It” in 2013, as well as the children’s book, “Bee See: Who are our Pollinators and Why are They in Trouble?” The peding extinction of the Monarch Butterfly by pesticidess led to the publication of “Save the Monarch Butterfly.”