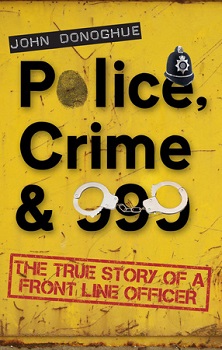 Ever wondered what really happens behind the scenes in the police? What bizarre 999 calls are made to the emergency services? Why can wearing two pairs of socks make you a suspect? What is the link between police and vampires? Which Royal arrest never made news headlines? What covert sign do officers make when they no longer wish to talk to you?

After successful careers in both the military and business, John Donoghue realised that the higher you get in any organisation, the less fun you have. So, after handing back his expense account and company car, he joined the police in search of excitement and thrills… and discovered some surprising answers to these puzzling questions.

PC John Donoghue reveals all in his fascinating and hilarious true account of a year in the life of a front line response officer. Names and places have been changed to protect the guilty… but if you call the police, maybe, just maybe, it could be Police Constable John Donoghue turning up at your door.

This book will appeal to anyone interested in crime and police, as well as fans of autobiographies and humour.

This book was hilarious in a special dad/police humour kind of way, which is a combination of dark and groan worthy (in a good way).

Having known and spent time with people who work for the police in some of the less affluent areas of the country, I’m pretty sure that this book is pretty accurate give or take a few instances of artistic license.

The book is essentially a collection of anecdotes (‘war stories’) from the author and his colleagues, covering a range of the more obscure jobs they have to deal with. While most of the book is designed just to entertain you and share some of the weird and wonderful jobs, such as 999 calls to the police to order an officer help hang some curtains in the front room and chasing missing goths to Whitby and the burial place of Dracula, there are actually some little nuggets of wisdom buried in there.
Such as; what do you do when you’re the sole officer sent out to apprehend an angry giant? How do you stay sane when everyone around you hates your guts and yet calls you when things go wrong?

Also, there are a surprising number of dirty protests that the police have to deal with. That’s a side of the UK that a lot of us luckily never have to see, while the poor Five-Oh are being spat at, bitten, scratched and smeared in ick. Something that we don’t appreciate by half because it’s too distasteful to talk about in civilised society (sorry for lowering the tone!)

You may have guessed that this is something that I feel quite strongly about, so I’ll take a second to address something I saw in a couple of negative Goodreads reviews about this book – namely that the author has no empathy for the community he serves, bordering on outright contempt.
I don’t think empathy and contempt are mutually exclusive to begin with, but I think it’s impossible to be a big ball of empathy while seeing the worst in people every day, being openly hated by all your ‘customers’ and attending that many sudden deaths – the only way to survive is to quit, be horrible or be hilarious. Thankfully, John Donaghue decided to be hilarious and write this book for our entertainment!

His writing style is very easy to read but comes across as exaggerated, though I don’t think that the majority of his stories actually are. I wouldn’t recommend this book if you’re squeamish, there are no punches pulled when it comes to descriptions of aforementioned dirty protests and there are some occasions when he does appear to make light of deaths.

The book is a fast moving collection of work stories, random facts and funny interactions between the police and the community they serve. However, this is a book written to amuse the reader and share the fun and the bizarre rubbish they have to deal with on a day to day basis. It isn’t a balanced representation of all the jobs they encounter – it doesn’t include the sad or gory stuff, it doesn’t include the court proceedings of each case or go on about the lack of resources allocated to the police force (though this is mentioned a couple of times, it’s essential when explaining why so few officers turn up on big jobs.)

If you’re used to police/hospital humour (doctors and nurses have some of the darkest senses of humour I’ve ever encountered!) and are looking for a fun book to read, this book for you.

John Donoghue never set out to be to be a writer … he wanted to be a sailor …and a soldier …and a policeman.

When he left school, he ran away to sea …or more accurately, caught the train to Dartmouth where he enlisted as a Commissioned Officer in the Royal Navy.

After six years on the high seas, he transferred to the Army, serving Queen and Country throughout the Cold War. However, when it began to thaw, he took that as his cue to move on.

Leaving the army as a Captain, he joined an international security organisation, although it was more budgets and spread-sheets than James Bond and Pussy Galore.

Bored, and in search of more fun and excitement, he handed back his company car, expense account and keys to the executive toilets and joined the police force where he is currently a serving PC.