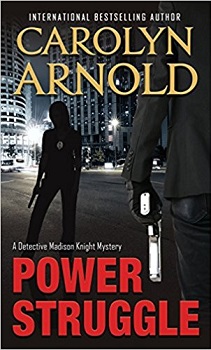 One hit man who’s back for revenge.
One detective who’s not going down without a fight.

It’s been ten months since Detective Madison Knight almost died at the hands of Russian Mafia hit man Constantine Romanov. She hasn’t seen hide nor hair of him since he escaped police custody and fled to Russia soon after his arrest, except now her latest murder investigation gives her reason to believe he’s back in town.

Seeing as the victim is the man who killed her grandfather, her perspective may be a little skewed, but with the MO smacking of Constantine and the victim’s connections to the mob, she finds it hard to be objective. Still, she’s doing her best to consider all the evidence.

When she receives a threatening letter from Constantine, however, her suspicions are confirmed. And he’s made it abundantly clear that not only does he plan to finish what he started but he has her family and loved ones in the crosshairs, too. Madison vows to do whatever it takes to save them, but as the hours race by, the body count rises. And the stakes only get higher when Madison’s sister, Chelsea, goes missing.

Now, Madison’s only play is to take Chelsea’s disappearance for what it really means: Constantine is calling Madison out for one final showdown. And they won’t both survive…

In Power Struggle, Detective Knight is investigating the murder of Jimmy Bates, found dead in his bed after having been tortured. This case is too close for comfort though for Madison. Back before Madison had been born, Jimmy had murdered her grandfather, so to see him killed in this manner gives her slight satisfaction.

However, she can’t help but notice the similarities between the way Jimmy was murdered and an old case in which the murderer, Constantine Romanov, got away, not before nearly killing Madison. Is Constantine back and is Madison still on his hit list?

Power Struggle is the first Detective Madison Knight book that I have read. Whilst I would advise reading the series in order, I can honestly say that I never had an issue understanding the plot, nor the characters. There are some moments when it would have been good to have known the back story, but when it came to those that actually mattered, Ms. Arnold had given us information to understand them fully.

The book not only deals with Madison and her career as a detective, but also her family and personal life too. She is a tough woman with a soft centre, but she makes sure that she always puts on her game face and never lets anyone see how scared and unsure she is on the inside.

Ms. Arnold had me gripped to each and every page, which heightened with the discovery of a second victim, and then the confirmation that Constantine was back, and that he was not only targeting Madison this time, but her family and friends too. There were numerous people who could have been pulling Constantine’s strings, but who and why wasn’t revealed until the very end.

The book is filled with mystery and suspense, surrounded by plenty of action. It is a terrific book that was not only enjoyable but intensified as the plot progressed. I can’t wait to read more by Ms. Arnold.