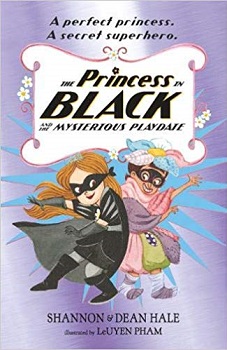 The Princess in Black and the Mysterious Playdate

Noseholes and elephants! A pet-eating monster interrupts a perfect playdate with Princess Sneezewort. . . . But who is that new masked avenger?

Princess Magnolia and Princess Sneezewort have plans . . . mysterious plans, like a princess playdate! They dress-up slam! They karaoke jam! But then a shout from outside Princess Sneezewort’s castle interrupts their fun. It’s a monster! This is a job for the Princess in Black.

Yet when the Princess in Black gets there, she finds only a masked stranger and no monster in sight. But all is not as it seems! Action and humor abound in this ode to friendship that proves that when shape-shifting monsters intrude on your plans, two heroes are better than one.

Princess Magnolia is a secret monster fighting princess. When she hears the monster alarm she changes into her superhero outfit and becomes ‘The Princess in Black’. One afternoon after sending another monster back to his world, the princess heads off for a playdate with her friend, Princess Sneezewort.

What Princess Magnolia hadn’t realised was that another monster had crept out of his hole and was now following the Princess. He wanted to eat goats but would settle for anything that looked or smelt slightly like one.

Whilst playing at Princess Sneezeworts castle the two hear screams coming from the park that a monster is there. Princess Sneezewort always wanted to be a hero and knows that she needs a disguise to become one, so she wraps herself in blankets and becomes ‘The Princess in Blankets’ and heads off to fight the monster, but when she arrives he has disappeared but The Princess in Black in there looking for the monster too.

Can the two find the monster, keep their true identities from one another and finish their playdate?

What I like about these stories is how they combine a fairytale-Esq book with a strong, confident, fighting female who is really a Princess and when she’s not fighting monsters can be found doing her royal duties.

The story is enjoyable and the text is large for younger readers. The book is also filled with bright, colourful illustrations too which bring the monster fighting Princess to life. The whole plot was enjoyable and it’s wonderful to show that girls can be feminine and kick-ass.