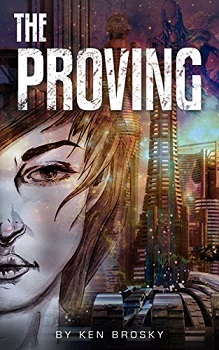 The Earth that man once knew is long since gone. Gone are the days of human dominance – For over one hundred years now, Earth has been overrun by Specters, terrifying ghost-like aliens that have forced the remaining humans to take refuge inside protected cities. These Xenoshields may protect, but they also cage. Humanity yearns for freedom. Tensions run high between the clans.

Today is the day of The Proving, the day when clan children of a certain age and training venture beyond the protection of the city shields into the wilds where Specters haunt the ancient ruins of man. Tasked with a routine maintenance mission, the clan children venture deep inside Specter territory and quickly find a secret so shocking that it challenges everything they’ve learned.

Poignant, thrilling, and deeply atmospheric The Proving is a non-stop thrill ride you can’t help but sink your teeth into. This coming-of-age tale is a vividly detailed testament to the realities of social pressure and resilience of the human spirit in the shadow of Armageddon. Journey forth into the breach as the last of the human race balances on the precipice of Earth’s final hours.

After a comet enters the Earth’s atmosphere and nearly crashes into it, it leaves in it’s trail, a ring of ice covering the planet. Not only does it leave the ring, but it also brings with it, deadly Specters.

Specters are creatures capable of killing anything, including humans. To help save the people of Earth, cities were formed surrounded by protective energy barriers, so that they could keep the Specters out, and the people safe.

The unfortunate thing is though, that the machinery keeping the energy shields running are outside the barriers, and needs to be kept maintained.

It is up to the local teenagers to venture outside the safety of the barrier, and go on what will become their first ‘Proving’, to maintain and repair the energy shield.

For nine teenagers, this day has arrived. They must work together if they are to fulfil their jobs and return safely inside the energy shield.

The Proving is a dystopian, sci-fi cross book, set in a hard-going futuristic world. Like in most dystopian novels that I have read, it always seem to be up to the teens/young adults to be the ones to put themselves in danger, and this book is no different.

It may have the undertones of every dystopian novel, but the core of the book is anything but. The teens are all superbly written, and each of them brings that added depth to the story.

The plot itself is pretty unique, in terms of the comet, ring of ice and Specters. It is a fast-paced, engaging and engrossing book, something that a young adult will love.

Fluently written, it will capture the imagination, and have you breathing a sigh of relief that you don’t live in a world surrounded by human-killing creatures. 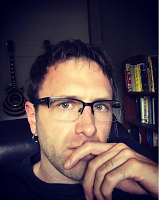 I received my MFA in fiction writing from the University of Nebraska-Omaha. I’ve had over a dozen short stories published, but my main focus now is Young Adult books. My previous series, The Grimm Chronicles, is an award-winning (really!) fantasy adventure series about a hero who must vanquish the monsters of Grimm’s Fairy Tales.

My newest series is The Earth-X Chronicles, a YA sci-fi adventure that spans time and space. Alien ghosts, backstabbing clans, and mysterious keepers of knowledge all conspire to make this an entertaining series! I’m so excited about it that I just swallowed my gum!