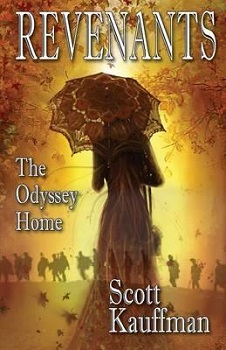 ONLY BETSY CAN GET HIM HOME IN TIME; ONLY HE CAN BRING HER BACK BEFORE IT’S TOO LATE.

A grief-stricken candy-striper serving in a VA hospital following her brother’s death in Vietnam struggles to return home an anonymous veteran of the Great War against the skullduggery of a congressman who not only controls the hospital as part of his small-town fiefdom but knows the name of her veteran.

A name if revealed would end his political ambitions and his fifty-year marriage. In its retelling of Odysseus’ journey, Revenants casts a flickering candle upon the charon toll exacted not only from the families of those who fail to return home but of those who do.

I chose this book with only knowing the title and nothing else about the book. When I received the book I suddenly realised that I was not excited to read the story, as it seemed like it would be a bit boring. I am so happy to say I was mistaken in my assumptions.

Kauffman integrates stories from wars that are several years apart, but that encompass a mystery that was decades in the making. Set in the Seventies and told largely from Betsy’s viewpoint, the reader gets a glimpse into the trauma that both the Great War and Vietnam war caused. Not only did the soldiers deal with horrific realities, but their families and friends did too as their soldiers came home.

The stories from both wars wove together well and definitely kept me interested, so much so I read it in two days! I loved how well each character was developed and (sort of spoiler alert) I appreciate the ending was not tied up in a neat bow. I usually don’t like that kind of ending, but it was perfectly suited to the story and subject matter.

Kauffman’s writing brought the setting, characters and story to life. I felt like I really was listening to Betsy’s memories. I was totally immersed.

Because of the mature thematic elements of war, smoking, and some rough language, I would not recommend that elementary and middle grade kids read it, but it is perfect for all other audiences.

Scott claims his fiction career began with a in-class book report written in Mrs. Baer’s eighth-grade English class when, due to a conflict of priorities, he failed to read the book. An exercise of imagination was required. Scott snagged a B, better than the C he received on his last report when he actually read the book. Thus began his life-long apprenticeship as a teller of tales and, some would snidely suggest, as a lawyer as well, but they would be cynics, a race Oscar Wilde warned us knew the price of everything and the value of nothing.

Scott is the author of the legal-suspense novel, In Deepest Consequences, and a recipient of the 2011 Mighty River Short Story Contest and the 2010 Hackney Literary Award. His short fiction has been appeared in Big Muddy, Adelaide Magazine, and Lascaux Review. He is now at work on two novel manuscripts and a collection of short stories. He is an attorney in Irvine, California, where his practice focuses upon white-collar crime and tax litigation with his clients providing him endless story fodder.